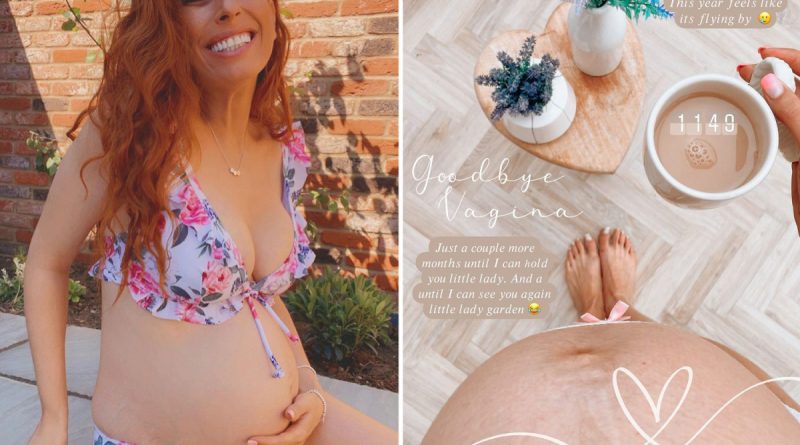 
STACEY Solomon said “goodbye to her vagina” as her bump is now so big she can’t see her “lady garden”.

The Loose Women panellist, 31, has been keeping fans up to date on the pregnancy of her first daughter with Joe Swash.

Stacey commented on how quickly time passed with a picture of her bulging pregnancy belly.

The star held a cup of tea while standing by a heart-shaped bench with plants on them.

She wrote: “Hello August. I can’t believe it’s already august… This year feels like its flying by [sic.]

Earlier in the week, Stacey shared a cute video of her two-year-old son Rex “playing” with his unborn sister.

The 31-year-old star pulled up her top to reveal her bare stomach as the toddler rubbed her tummy and whispered to it.

Rex snuggled up to his mum while giggling and chatting to his sister, even bringing a blue dinosaur stuffed animal to Stacey’s bump – proving that he will be great at sharing.

Stacey told fans: “I hope you had a lovely weekend, we’ve been soo lazy.

“Now we are laying in bed and Rex is playing with his little sister, I hope this makes you smile as much as it did me this morning.”

Stacey and Joe announced their pregnancy earlier this year, with it later revealed that the couple are expecting their first daughter.