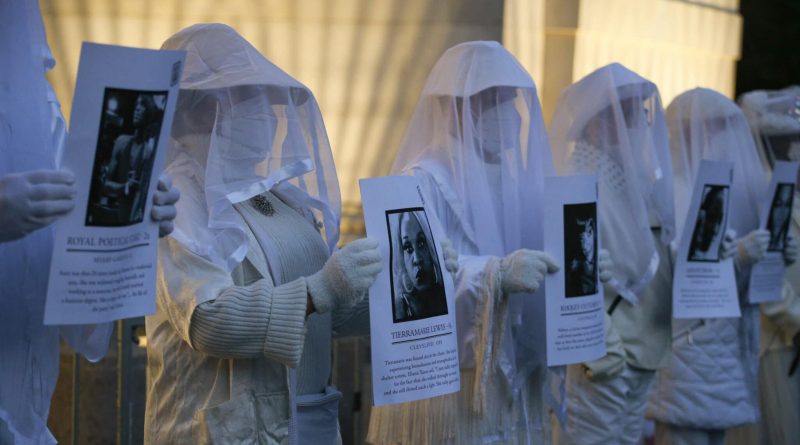 The world marked Trans Day of Remembrance on Saturday (20 November), honouring those lost to transphobic violence during the deadliest year on record.

Trans people have been murdered at shocking rates this year, with at least 45 trans, non-binary and gender non-conforming people violently killed so far in the US alone, far surpassing the total number of people killed in the whole of 2020.

Vigils and protests were held across the world, calling for an end to the devastating violence.

A march was held in Washington Square Park, New York, honouring the trans folk killed in the US this year.

The protest was hosted by Gays Against Guns, whose members dressed in all-white and silently held placards with the names and stories of those lost.

A protest was held outside the BBC headquarters, Broadcasting House, in London on Transgender Day of Remembrance.

This is the best photo from TDoR outside the transphobic @BBC last night. By Martha Dunkley, showing the candles we lit for the dead and the headquarters of the hate-machine in the background. pic.twitter.com/nAFfZDzx3w

Brazil is the country with the largest number of recorded murders of trans people; nearly 150 this year.

The action of the BBC can only be regarded as stochastic terrorism, it will encourage people with murderous intent to kill trans people there…

Protesters held a candlelit vigil in response to the recent infamous article released by the BBC, which claimed that cisgender lesbians are being pressured into sex by trans women.

The article was also published in Brazil, the deadliest country in the world for trans people.

In Seoul, South Korea, the trans community and their allies marched through the streets to mark Trans Day of Remembrance.

Iconic. Girl’s Generation “Into The New World” continues to be such a powerful song of protest and solidarity in South Korea, especially for the LGBTQ community. Always played at pride events. This yesterday at #TDOR march in Seoul. This year’s been an especially difficult one. https://t.co/qIhxWHC48J

Participants sang “Into the New World”, a song by the girl group Girls’ Generation, which has become a powerful protest song for South Korea’s youth.

In Paris, more than 1,000 people headed to Place Saint-Gervais for a protest that was fill of “emotion and anger”, according to local activist group Du Pain et des Roses.

Hundreds of protesters gathered in Shinjuku Central Park for the event, organised by Transgender Japan, which said: “Hundreds of transgender people are killed every year around the world, and in Japan there are many people who take their own lives due to the denial of their human rights.”