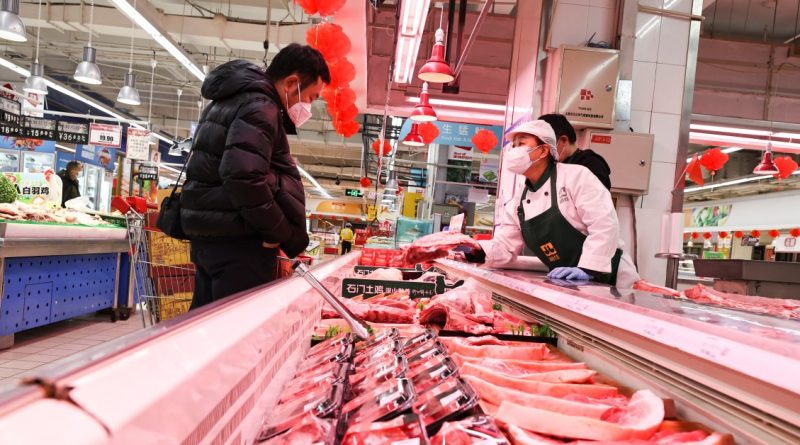 
‘Tis the season in China when whole hams and cured sausages should be flying off the shelves as households prepare for the Lunar New Year, the biggest festival in the nation’s calendar.

But as hundreds of millions grapple with an unprecedented Covid outbreak, the country’s fondness for the celebratory dishes that usually accompany gatherings with friends and family is in deep freeze. The price of pork, China’s favorite meat, has plunged.

The food industry is again bearing some of the harshest economic costs of the pandemic, although this time around the problem stems from the government’s abrupt exit from the Covid Zero policies that had shaped its response to the virus for three years. As infections rip through the population, fewer people are meeting up at home or in restaurants, and they’re spending less on pricier items like meat, while the sick eat lighter meals.

“Sales are slow and demand has been very sluggish,” said Zhou Huan, who runs a butchers shop in Beijing. Zhou said orders fell by about two-thirds from what might be expected at this time of year after the government effectively abandoned Covid Zero in early December. “People suddenly vanished. No one was out,” he said.

Pork is China’s staple protein, accounting for about 60% of all meat consumed in the world’s most populous country, according to McKinsey & Co. Raising hogs is a business that includes millions of family smallholders, to giant agricultural concerns, to the trading houses that ship animal feed from farmers as far afield as the US and Brazil to fatten the world’s biggest herd. And the lunar holiday, or Spring Festival, which falls this year at the end of January, is when pork is usually most in demand.

The numbers this year tell a different story, with weak consumption exacerbated by rising supply as farmers rush hogs to slaughter after the end of Covid Zero allowed freer movement of goods. Pork bought at China’s main wholesale markets fell to about 64,000 tons last month, almost half that of a year ago, according to the farm ministry. Producers are now losing money after pig prices dropped by about a third since the start of December, according to data from Shanghai JC Intelligence Co.

“Consumption may have hit rock bottom, but prices could fall further,” said Pan Chenjun, a senior analyst with Rabobank. “Pork demand this Spring Festival will be lower than last year and even worse than the year before. Covid cases have just peaked but it doesn’t mean that demand will come back immediately,” she said.

The ramifications extend beyond the domestic hog industry. Pork is a key food component in the consumer price index, so falling prices will be welcomed by a central bank wary of the inflationary impact of China’s reopening. The latest figures for December showed pork inflation decelerating on year, and contracting on a monthly basis. But the foreign farmers that supply animal feed will be less sanguine. China’s import bill for soybeans alone topped $60 billion last year.

Commodities markets broadly expect Chinese demand to recover from the second quarter as the population builds immunity to Covid and economic activity revives. But much depends on how strongly the economy can perform after slowing so dramatically in 2022, against the backdrop of a looming global recession.

Regarding pork, “demand should improve gradually going forward and overall consumption in 2023 would be better than 2022,” said Pan. “But there are also great uncertainties after the opening up, and it is unknown whether consumption can return to pre-Covid levels. A lot of factors are at play this year, like economic performance and unemployment rates.”

In the meantime, the impact of the surge in travel expected over Lunar New Year is in the balance. Newly won freedom from China’s crushing virus restrictions could lead to a splurge in spending as friends and families reunite.

But the event, which has been dubbed the world’s largest annual migration, is also likely to spread infection even further through the population. Beyond that, the risk is that three years of Covid Zero, including travel curbs, stay-at-home orders, and citywide lockdowns, will have chipped away at the usual patterns of consumption.

“It’s hard to quantify, but I am indeed eating less meat,” said Will Xu, a fund manager living in Shanghai, who got Covid in mid-December and who doesn’t plan to travel for the Spring Festival. “We also dine out less now. It seems the infection affected my appetite for meat.”