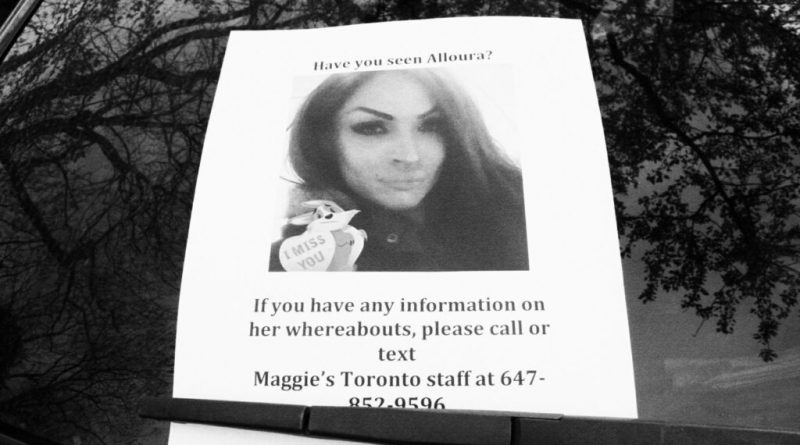 Alloura Wells had been missing for four months before her body, which was laying in a police morgue, was identified. (Maggie’s Toronto Sex Workers Action Project)

Toronto police have admitted they made a “series of mistakes” after the body of a trans woman, Alloura Wells, was found at the bottom of a ravine in 2017.

Wells’s body was found in Toronto’s Rosedale Ravine in August 2017, the month after friends noticed she was missing, but she was not reported missing until November 2017. Her badly decomposed body was identified that same month.

The subsequent police investigation into her death was plagued by a catalogue of errors, CBC podcast The Village has revealed in new in-depth reporting about the case.

The mistakes include a failure to follow protocol; paperwork not filed; failing to interview Wells’s boyfriend, Augustinus Balesdent, despite him being the last person to see her alive; and failing to notify the trans community that her body had been found.

As a result, Toronto’s interim police chief James Ramer has admitted that the police investigation into her death made several mistakes, and added that one police officer would be charged with neglect of duty had they not already retired.

Ramer conceded the investigation into Wells’s death was poorly done. “Particularly at the start, you know, we did not do this well,” he said. “The homicide squad wasn’t notified, as per procedure.”

He also couldn’t explain why the public wasn’t notified. “Public outreach, particularly to that community, would have been very, very important to do and a very important step. And so these were things that were done poorly.”

Ramer, a veteran of the homicide squad, acknowledges that failing to fully interview Balesdent – who he said is “believed to be one of the last people that saw Alloura” – points to “a series of mistakes”.

“There was an [officer] in that case that we would have laid charges with under the Police [Services] Act. But that individual retired, so we didn’t have jurisdiction and couldn’t proceed.” The charges, he added, would have been for “neglect of duty”.

Epstein noted that Alloura Wells had been a frequent target of the police while she was alive – due to being homeless, trans, a sex worker and drug user – yet when she died officers did not investigate with the seriousness required.

“In many ways, the issues respecting the Alloura Wells investigations are a microcosm of the systemic issues existing at the service,” the Epstein report concludes.

Wells’s friends and family initially thought she was in prison, and were not informed that a body had been found. It was months before news of her death reached the trans community, and the circumstances immediately struck those who knew her as odd – her body was found by her isolated tent in the ravine where she usually camped in a group of friends, including with Balesdent.

Monica Forrester, an outreach co-ordinator at Maggie’s Sex Work Action Project who was one of the first to notice Wells was missing, said that after four years, friends and family still have no answers about the circumstances of Wells’s death.

“I’m tired of people treating trans people like this,” Forrester said. “Regardless if we’re homeless, we’re addicts, whatever we are, we deserve the same rights as everyone else.”