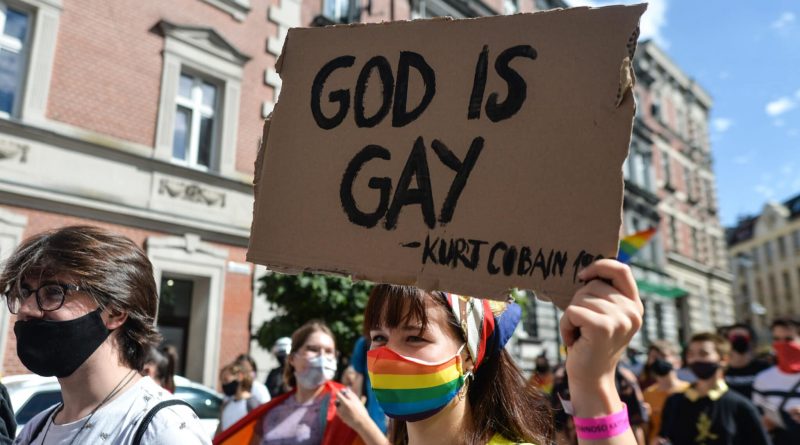 An activist carries a placard saying ‘God Is Gay’ during Katowice Pride Parade in Poland. (NurPhoto via Getty/ Artur Widak)

Poland’s prime minister is refusing to bow to the European Union as it faces possible sanctions over its defiance of EU law.

PM Mateusz Morawiecki told European Commission president Ursula von der Leyen that Poland “will not be blackmailed” after she stated her intentions to punish the country for challenging the supremacy of EU law.

Earlier this month, Poland ruled that parts of EU law are incompatible with the Polish constitution.

The line from Polish authorities is that they want to rectify their inefficient justice system by gaining judicial independence.

While this may at first seem a bureaucratic matter, much of the underlying tension between the EU and Poland centres around LGBT+ rights within the country.

The court said on Thursday that four crucial provisions of the main EU treaty clash with the Polish constitution. One of these is Article 2, which details the Union’s main values: “Respect for human dignity, freedom, democracy, equality, the rule of law and respect for human rights, including the rights of persons belonging to minorities” in a society in which “pluralism, non-discrimination, tolerance, justice, solidarity and equality between women and men prevail.”

The court also challenged the right of the EU to punish its members for not observing its laws or values, something the EU has done in recent years over Poland’s violations of LGBT+ rights.

In 2019, a number of local authorities in Poland declared themselves as “zones” free of “LGBT ideology”. The move was the culmination of a worrying rise in state-sanctioned homophobia and media hostility.

Though Poland was one of the first European countries to decriminalise homosexuality in 1932, a culture war has escalated between religious conservatives in the predominantly Catholic country and liberal-minded Poles in recent years.

The European Commission declared the zones violated EU law regarding nondiscrimination on grounds of sexual orientation. Five Polish regional councils were contacted and urged to revoke their “LGBT-free” declarations in order to receive funding. Three of the councils complied.

In one, Podkarpackie, a new resolution titled “Podkarpackie as a region of well-established tolerance” was passed instead. In Lubelskie, another of the contacted territories, officials passed a motion “on the protection of fundamental rights and freedoms”.

The recent ruling now calls into question the EU’s ability to make these kinds of sanctions.

EU declares Poland will pay for challenge to common law

“I am deeply concerned,” von der Leyen told yesterday’s meeting of the European Parliament in Strasbourg ahead of a speech to the assembly by Morawiecki.

“We cannot and will not allow our common values to be put at risk,” she warned.

“The people of Poland wanted democracy […] they wanted the freedom to choose their government, they wanted free speech and free media, they wanted an end to corruption and they wanted independent courts to protect their rights,” said von der Leyen, referring to the fall of Communism in Poland in 1989.

“This is what Europe is about and that is what Europe stands for,” she added. “The recent ruling of the Polish Constitutional Court puts much of it into question.

In response, Morawiecki said that Poland was a “proud nation” and would not be cowed by threats of financial penalties which were tantamount to “blackmail”.

“I reject the language of threats, hazing and coercion,” Morawiecki said. The PM went on to state that the West-East divide had resulted in first and second classes within the EU, with member states like Poland given less lenience.

“We cannot remain silent when our country – including in this Chamber – is attacked in an unfair and biased manner.”

If Poland continues to usurp the EU’s authority, it will face three possible lines of sanctioning. The first option is the Commission legally challenging the Polish court’s judgment, which could lead to fines.

The second option is the EU’s conditionality mechanism. This involves EU funds being withheld from Poland.

Poland is due to receive 23.9 billion euros in grants and 12.1 billion in cheap loans that it applied for as part of the EU’s recovery fund after the COVID-19 pandemic. It is unlikely this money will be sent until the clash is resolved.

A pause could also be put on Polish access to EU grants for development and structural projects in the 2021-2027 budget, which are worth around 70 billion euros.

The third, and most extreme option, is the application of Article 7 of the EU’s treaties. Under this, rights of member states can be suspended due to a breach of the bloc’s core values – including the right to vote on EU decisions.