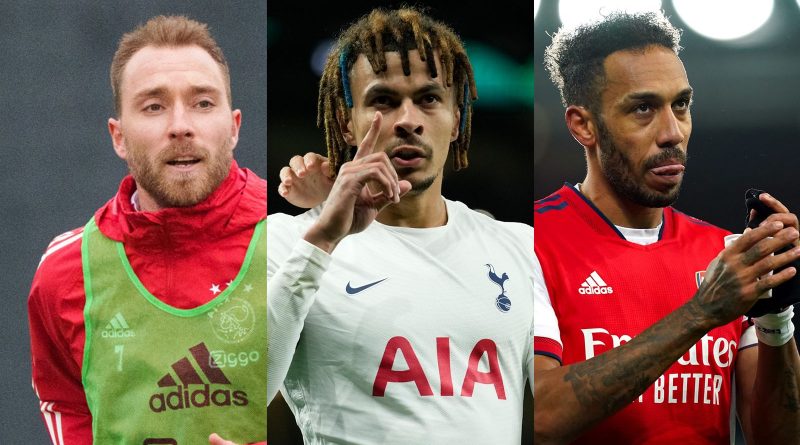 
Pierre-Emerick Aubameyang agreed a sensational free transfer from Arsenal to Barcelona to cap a frantic Deadline Day as clubs raced against the clock to complete their business.

It seemed talks had broken down between Arsenal and Barcelona over Aubameyang, despite the striker’s arrival in the city on Monday morning, but an agreement was finally reached after he accepted a significant pay cut to facilitate the move.

Aubameyang, who was stripped of the Arsenal captaincy following a disciplinary breach in December, had 18 months left on his contract and the club are expected to save around £25m in wages by moving him on permanently rather than on loan.

Arsenal fans were left frustrated by their failure to replace him, leaving Alexandre Lacazette and Eddie Nketiah, both of whom are out of contract in the summer, as their only striking options, but there were incomings to get excited about elsewhere.

Frank Lampard’s Everton beat Crystal Palace to the loan signing of Donny van de Beek from Manchester United, then agreed a stunning deal for Tottenham’s Dele Alli worth up to £40m.

Alli heads to Goodison Park having endured a difficult spell at Spurs but, still only 25, the two-time PFA Young Player of the Year winner will hope to recapture his best form under the guidance of one of the Premier League’s greatest-ever midfielders.

Winger Dejan Kulusevski arrived on an 18-month loan deal which will be made permanent for a fee of £29.2m if certain criteria are met, while midfielder Rodrigo Bentancur joined in a deal which could rise from £15m to £21.5m with add-ons.

Spurs had endured frustration earlier in the window, missing out on Wolves’ Adama Traore and Porto’s Luis Diaz as they opted to join Barcelona and Liverpool respectively, but the arrivals of Kulusevski and Bentancur provided a much-needed boost for Conte.

As Conte attempts to steer Spurs towards a bright future, a hero of their past remerged at Brentford.

Seven months after suffering a cardiac arrest during a match between Denmark and Finland at Euro 2020, Christian Eriksen signed a six-month loan deal at the Brentford Community Stadium.

The Dane’s arrival in west London represents a coup for the Bees, who are confident he will show his quality again having been fitted with an implantable cardioverter-defibrillator following his cardiac arrest and passed all necessary medical checks prior to the move.

Eddie Howe was able to bolster his defence with deals for Aston Villa’s Matt Targett and Brighton’s Dan Burn, taking their total spend for the month to £93m, but a proposed £33m move for Hugo Ekitike collapsed after the highly-rated striker opted to stay at Reims and Newcastle also failed with one final attempt to sign Jesse Lingard from Manchester United.

Like top-four rivals Arsenal, Manchester United declined to make any Deadline Day additions, perhaps instructing their decision to keep hold of Lingard, who was also wanted by West Ham.

Manchester City were active, confirming the signing of Argentinian striker Julian Alvarez from River Plate, a player seen as one for the future, but Liverpool’s attempts to sign Fulham’s Fabio Carvalho, another youngster, proved unsuccessful as they ran out of time to get the deal done.

There was a major Deadline Day arrival north of the border, as Aaron Ramsey agreed a shock loan move to Scottish Premiership leaders Rangers from Juventus. The former Arsenal midfielder could now make his debut for the club against rivals Celtic on Wednesday, live on Sky Sports.