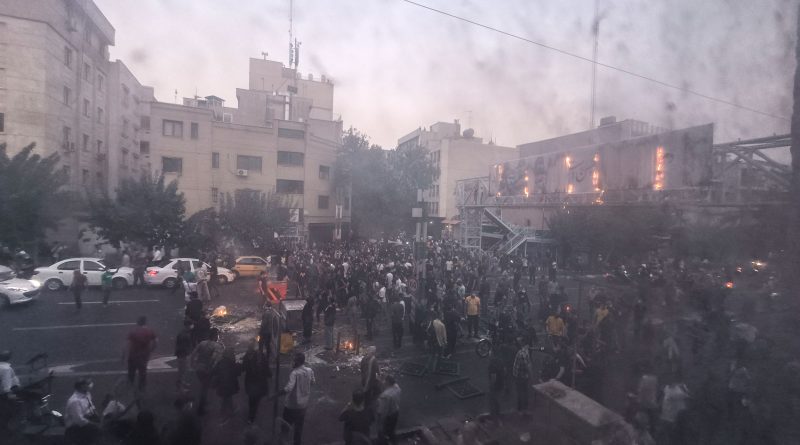 
In Iran, the death of 22-year-old Mahsa Amini in custody of the country’s morality police last week has sparked sweeping protests internationally, calling not only for an end to the hijab mandate, but also to the Islamic Republic.

The morality police, which enforce Iran’s requirements for women to behave and dress conservatively, arrested Amini in Tehran on Sept. 13 after they accused her of violating the hijab law. She died three days later of what police said was a heart attack, but her family and protesters argue that wasn’t the case.

Iranian police have released closed-circuit footage showing Amini collapsing on the back of a chair at a detention center before falling to the floor. Her family has accused authorities of lying about her death and argued that she had no pre-existing heart condition, according to Emtedad news, an Iranian pro-reform media outlet.

Tehran, Iran People gather during a protest for Mahsa Amini, who died after being arrested by morality police allegedly not complying with strict dress code in Tehran, Iran on September 20, 2022. Protests spread to 15 cities across Iran overnight over the death of the young woman Mahsa Amini after her arrest by the country’s morality police. In the fifth night of street rallies, police used tear gas and made arrests to disperse crowds of up to 1,000 people, the official IRNA news agency said.

Since her death, outraged Iranians have led protests across dozens of cities. Some female protesters burned their hijabs or cut their hair in an act of defiance. The government reported Thursday that 17 people, including two security officers, had died since demonstrations began. Mobile networks have been disrupted and access to Instagram and WhatsApp has been restricted.

Protests have also spread internationally, including in Lebanon, Germany, Turkey the U.S. and Greece.

The United Nations has called for an impartial inquiry into Amini’s death. “We strongly condemn the use of physical violence against women and the denial of fundamental human dignity when enforcing compulsory hijab policies ordained by State authorities,” UN experts said in a Sept. 22 statement. Her death has also drawn criticism from the U.S., which is trying to revive the Iranian Nuclear Deal.

Senior Iranian officials, including President Ebrahim Raisi, have promised an investigation will ensue. In the meantime, the protests have morphed into a broader critique of the ruling party—criticizing not only an infringement on women’s rights but also anger over the effects of crippling U.S. sanctions on the economy and corruption.

Tehran, Iran A picture obtained by AFP on Sept. 21, 2022, shows Iranian demonstrators burning a rubbish bin in the capital Tehran.

Berlin, Germany A female protester yells while cutting her hair with scissors as an act of solidarity with women in Iran during a demonstration on Sept. 23, 2022.

New York, NY People participate in a protest against Iranian President Ebrahim Raisi outside of the United Nations on Sept. 21, 2022 in New York City.

Athens, Greece Demonstrators scuffle with riot police, during a protest following the death of Mahsa Amini, outside the Iranian Embassy, in Athens, Greece, Sept. 22, 2022.

Tehran, Iran Newspapers from Sept. 18, 2022 with a cover picture of Mahsa Amini.

Tehran, Iran People gather during a protest for Mahsa Amin in Tehran, Iran on Sept. 19, 2022.

Istanbul, Turkey Nasibe Samsaei, an Iranian woman living in Turkey, reacts after she cut her hair during a protest outside the Iranian consulate in Istanbul, Turkey on Sept. 21, 2022.

Tehran, Iran A pro-government demonstrator holds a poster of the late Iranian revolutionary founder Ayatollah Khomeini while attending a rally after the Friday prayers to condemn recent anti-government protests over the death of a young woman in police custody, in Tehran, Iran, Friday, Sept. 23, 2022.

Tehran, Iran Thousands of people marched through Iran’s capital during a pro-hijab rally Friday, Sept. 23, 2022 paying tribute to security forces who have moved to quell a week of protests by what media called “conspirators”.

Los Angeles, California Californian Kurds hold a demonstration and candlelight vigil to honor the memory of Mahsa Zhina Amini in front of the Federal Building on Sept. 22, 2022 in Los Angeles.

Los Angeles, California Californian Kurds hold a demonstration and candlelight vigil to honor the memory of Mahsa Zhina Amini in front of the Federal Building on Sept. 22, 2022 in Los Angeles.

New York, NY People participate in a protest against Iranian President Ebrahim Raisi outside of the United Nations on Sept. 21, 2022 in New York City.

New York, NY Photos showing the victims of the 1988 massacre of Iranian political prisoners are displayed during a protest against Iranian President Ebrahim Raisi outside of the United Nations on Sept. 21, 2022 in New York City.

Tehran, Iran People gather during a protest for Mahsa Amin in Tehran, Iran on Sept. 19, 2022.

Write to Kaya Lee Berne at kaya.berne@time.com and Sanya Mansoor at sanya.mansoor@time.com.