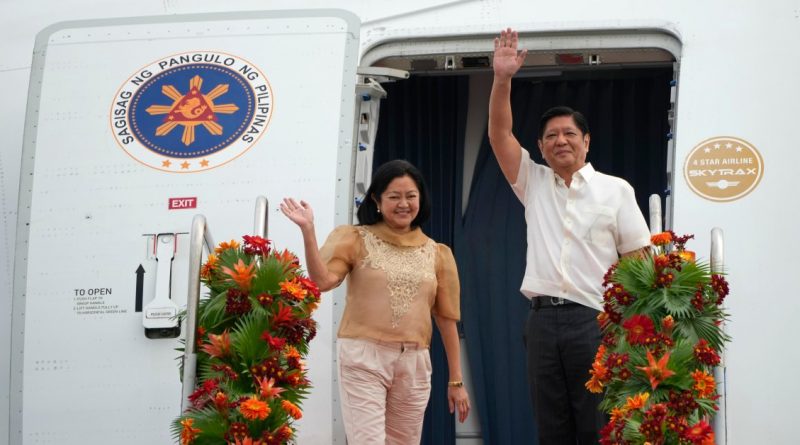 
Philippine President Ferdinand Marcos Jr. flew to Beijing on Tuesday for a three-day state visit to meet with Xi Jinping and other top officials in China to improve bilateral ties.

In a speech before departing Manila, Marcos said he looks forward to his meeting with Xi to shift “the trajectory of our relations to a higher gear” and broaden cooperation through bilateral agreements in trade, infrastructure development, and agriculture. More than 10 agreements are expected to be signed in this visit.

China is one of the Philippines’ major trading partners, accounting for some 20% of the Southeast Asian nation’s imports.

Marcos’ visit comes amid unresolved territorial disputes in the South China Sea. While not mentioning the sea row explicitly, Marcos said he looks forward to discussing political-security issues “of a bilateral and regional nature.”

“The issues between our two countries are problems that do not belong between two friends such as the Philippines and China,” he said. “We will seek to resolve those issues to mutual benefit of our two countries.”

Xi has long ignored a 2016 ruling from a U.N.-backed tribunal in The Hague, Netherlands, that invalidates China’s sweeping claims over the waterway, where an estimated $3.4 trillion in global commerce passes through each year. The Philippines, which lodged the complaint, decries China’s construction of military outposts and reclamation of artificial islands to assert its presence and control in the South China Sea.

In November, a senior Philippine navy official accused the Chinese coastguard of forcibly seizing rocket debris which fell in the waters of the Spratly Islands, an island group in the contested waterway. China denied this, and Marcos said he will clarify this during his visit.

The U.S., as it increasingly seeks influence in the Indo-Pacific region, has also voiced opposition to China’s sweeping claims. In November, U.S. Vice President Kamala Harris paid a visit to the Philippine province of Palawan, vowing Washington’s support for “peaceful resolution of disputes.” Marcos has previously said he will pursue “a friend to all, an enemy to none” foreign policy similar to that of his regional counterparts.

China-Philippine diplomatic relations were first officially established in 1975, during the dictatorship of Marcos Jr.’s father, the late Ferdinand Marcos Sr. “Our history of friendly exchanges with our northern neighbor goes back centuries,” Marcos Jr. said on Tuesday. “Bilateral cooperation has grown steadily. Today, our ties are deep, multi-faceted, and mutually beneficial.”