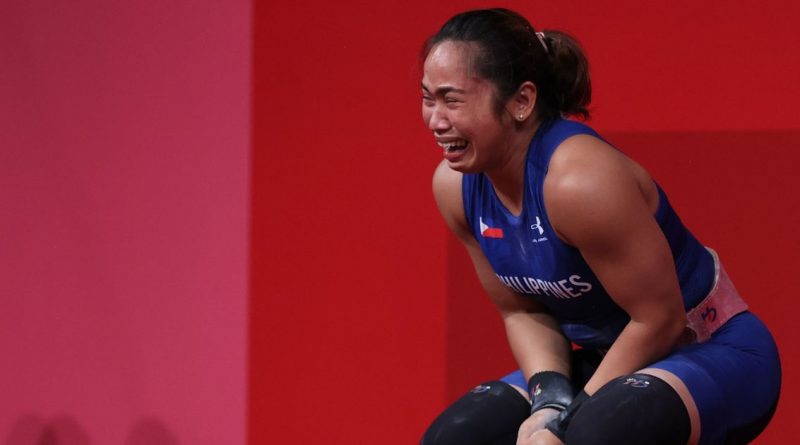 Filipino weightlifter Hidilyn Diaz has landed an eye-watering £477,000 and a house from the government after winning the Philippines’ first ever Olympic gold medal.

Diaz dramatically won gold in the women’s 55kg weightlifting class, winning the event ahead of world-record holder Liao Qiuyun of China with her final lift of the day.

An Air Force servicewoman in the Philippines, Diaz had been living in exile in Malaysia due to the coronavirus pandemic and was reduced to tears after obliterating her personal best to claim victory.

Diaz ended her nation’s 20-year wait for a medal in Rio in 2016 when she took silver in the 53kg class, but went one better in Tokyo and failed to hold in her emotions as the national anthem played.

According to Bloomberg, her success saw her claim more than just the gold medal around her neck.

It also landed her £477,000 from the government and other businesses, as well as a house.

The Philippines Sports Commission had guaranteed a 10million peso (£144,000) incentive for every medal won prior to the Games.

David Nepomuceno was the first Filipino athlete to compete at the Olympics in 1924, when he featured in the 100m and 200m sprint races.

Diaz’s victory in Tokyo is the Philippines’ 11th Olympic medal.

“It’s unbelievable, a dream come true,” Diaz said. “I want to say to the young generation in the Philippines, ‘You can have this dream of gold too’.

“This is how I started and finally I was able to do it.”

China had won all three of the weightlifting events in Tokyo before Diaz’s victory.

Diaz added: “I’m looking forward to enjoying life because I have been in Malaysia for, I don’t know, almost two years, so I’m really thankful I can go home now and celebrate with my family and the people who support me.”