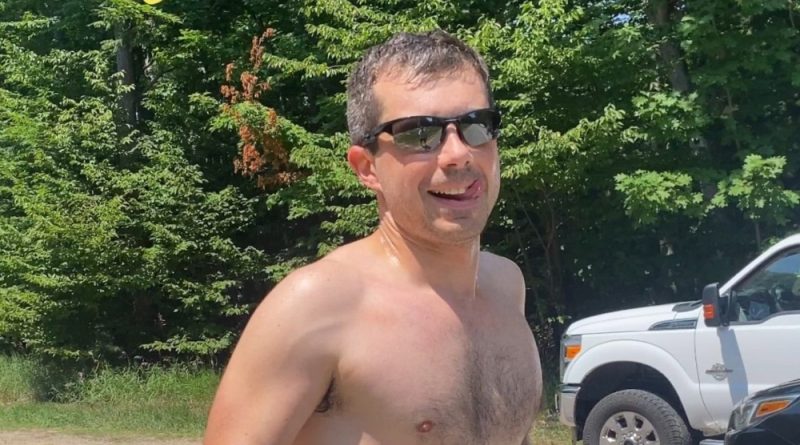 Pete Buttigieg smirks at his husband as he sprints past. (Screen capture via Instagram/@Chasten.Buttigieg)

Pete Buttigieg was promoted by popular demand to secretary of sweat after running shirtless in a park, prompting countless thirsty replies from followers.

Buttigieg, a former daddy after being pictured with a beard last year, was snapped by husband Chasten Buttigieg on Sunday (25 July) after cycling 60 miles on a bike before a “transition run”, which are brief runs for a couple of miles.

In the sticky 80°F (26°C) heat of Washington DC, the transport secretary sprinted shirtless through a wooded area, according to Chasten’s Instagram Stories.

The district had been gripped by a weeks-long heatwave earlier this month, but with temperatures slowly tipping downward, it seems that Buttigieg was eager to crank them back up.

Happy Sunday here’s a thirst trap of the Secretary of Transportation! pic.twitter.com/iwDRWDqpvh

As much as the picture drew a raft of critical responses on Twitter, some users dubbed the cabinet secretary’s “thirst trap” the start of “hot boy summer”. Just please remember to wear sunscreen.

Okayyyyyyyy @PeteButtigieg; 👀 We see you out here this #summer !! 👀We love to see it ! #HotBoySummer #Athletics #LGBTQ https://t.co/aVGFuTtFZj

Pete Buttigieg previously sought to court gay voters by growing a beard as he jostled to become the top Democratic presidential nominee.

As Jim Fall, director of such classics as Trick and The Lizzie McGuire Movie who first uploaded the photographs, said, bearded Buttigieg was all the work of FaceApp, a photo editing app.

“I think seeing Pete with a beard gives people pause,” he told The Advocate. “It’s like, dang, he’s smart and sexy. That’s an intoxicating combination.”

“No matter what you feel about his specific politics, the LGBTQ community should be celebrating,” Fall added.

“I see so many gay men on social media knocking him down, and it’s disheartening. You don’t have to love him or even support him, but don’t disrespect him. Don’t eat your own.”

While Buttigieg failed to shore up enough support to take on Donald Trump, he did end up securing a top position in president Joe Biden’s cabinet as transport secretary, becoming the first openly gay Senate-confirmed cabinet member.

Touted by his allies as something of a wunderkind politician, Buttigieg reflected on his place in the White House history books on a recent episode of The Late Night with Stephen Colbert.

“If you look at the ’50s, there was a historical episode called the Lavender Scare,” Buttigieg said.

“You couldn’t even be a bookkeeper or an astronomer in the federal government without your job being at risk if you were gay.”