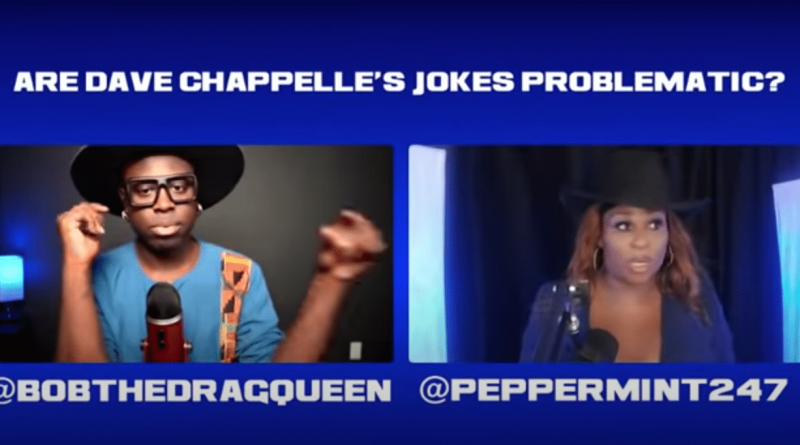 
Drag Race legends Bob the Drag Queen and Peppermint gave a breakdown of why Dave Chappelle’s anti-trans “comedy” is so troubling.

In a live broadcast on YouTube entitled “Are Dave Chappelle’s Jokes Problematic?”, the popular queens broke down for viewers precisely why Chappelle’s transphobic and homophobic jokes are so dangerous to the LGBT+ community.

Chappelle’s recent stand-up film, The Closer, saw him make disgusting jokes about trans women’s genitals, following on from similar anti-trans material in his previous Netflix special. He also references a late trans comedian he was friends with, Daphne Dorman, misgendering her as a punchline, and saying: “Daphne would have loved that joke.”

Discussing the special and the outrage that has followed, Bob said: “He only sees the value of queer or trans people, and their validity, [depending] on whether or not they support him. If you support him you’re great, and if you don’t then you’re not.”

In the special Chappelle tells the story of him calling Dorman, who died by suicide in 2019, to tell her he was in town and ask if she would like to open for his show that evening. At one point, Chappelle alludes to Dorman hitting on him during this phone call.

Explaining why joking about a trans woman behaving predatorily to a cis man is damaging to the public opinion of trans women in general, Peppermint argued: “The thing that’s a shame is that even in her death, he’s planting the seed that trans women are really just there to try to trick men into having sex with them.

“This is exactly what they say when they are putting forward anti-trans legislation and bills – whether its trans people in sports, trans people in bathrooms – that trans people are just men who dress like women, not even addressing that there are trans men and trans-masc and non-binary people.”

Earlier in the special, Chappelle tells the story of a different trans woman he met in a bar in Texas, who he says verbally attacked him over his previous comments about trans people. Chappelle describes the woman as having “big chiselled jawline and a big, thick Joe Rogan neck”, and also talks about wanting to ask her mother if she is “a dude or a man”.

“Invoking Joe Rogan does not do anything for your stance that you are sympathetic to trans people, period,” Peppermint pointed out.

Peppermint went on to discuss Chappelle’s jokes about being “Team TERF”, saying the comedian is “using anecdotal experiences and pulling popular lingo, applying it incorrectly, and using that as proof that he is knowledgeable about the community”.

“He’s using all this vocabulary that we’ve heard before, but a lot of people don’t really understand what it is, and then he’s home free with his cheque.

“Unfortunately lots of queer people have watched this special to understand what he’s talking about.”

In her concluding remarks, Bob the Drag Queen did not hold back on where she stands with Chappelle’s performance.

“Whenever I see Dave Chapelle egregiously attacking the queer, and especially the trans, community I want to say my piece and say: ‘I think this is incredibly problematic. I think it contributes to violence against trans people and the erasure of Black trans people.’

“You only think of Caitlin Jenner?” Peppermint agreed.

The pair also theorised about why some groups of both Black and queer people are so quick to defend the comedian’s remarks.

“It reminds me of the ‘You can beat me up too Chris Brown!’ attitude,” said Peppermint, referring to the reaction of Chris Brown fans following his 2009 assault on then-girlfriend Rihanna.

Bob suggested that some fans are reluctant to let go of their kinship to the comedian because they associate him with happy memories from their past. “I think it’s like if you say you have a problem with R Kelly and his behaviour, then everything in your life that has a memory attached to R Kelly is now tainted.”

When asked by Bob what she has to say to gay fans who are standing by Chappelle, Peppermint answered: “Ask the question – is there a joke that you can remember from your childhood that you thought was funny, that if you hear it today you realise it’s no longer funny because of what you now know? Because you are now more educated, because you are now more experienced?”

“Just because you’re gay and you liked this special – good for you, Mary. Good for you,” she continued. “If it’s so innocuous and you can withstand that special, then please go ahead volunteer for the trans community. Spend some of your time actually lobbying and working to fight the legislation that’s being passed in several states.

“You can fly your ass to Texas. Fly your ass to Alabama. Do it, please, because we would love some thick-skinned gay people who are willing to march on our behalf. So if you’re ready to go and you can really stand the transphobia, then you can join the fight.”