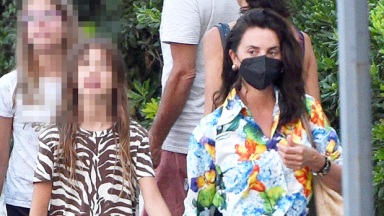 
Penelope Cruz isn’t often seen out and about with her kids. But on Friday, July 29, the Blow star stepped out with her two children with Javier Bardem, Leo, 11, and Luna, 9, looking energetic and stylish at the Hotel Astoria in Rapallo, Italy! In photos, the stunning actress, 48, slayed in a long-sleeved floral print blouse with front tie, casual denim jeans and a black face mask. She wore her hair down and accessorized with simple earrings. Leo and Luna looked summer-ready in shorts and tees as they walked alongside their famous mom. Both resembled Penelope, looking like downright mini-me’s as they mirrored her movements and held hands alongside her.

Penelope, who has been married to the Being the Ricardos star, 53, since July 2010, is a devoted mama. She had Leo Encinas Cruz back on January 23, 2011, in Los Angeles, California, and Luna Encinas Cruz, on July 22, 2013, much farther away in Madrid, Spain. “I don’t do long trips, and I try to work in my own city when I can, because I want to raise my kids myself,” she told Harper’s Bazaar in a January interview. “I’ve been lucky like that, and I hope it continues, because it’s kind of a gamble, to try to balance both.” The interview entailed her experience of shooting Pedro Almodovar‘s acclaimed 2021 Spanish film Parallel Mothers, about single moms who become pregnant by accident.

“Even for someone like me, who has been very clear about wanting children ever since I was a little girl, dreaming about that – still, those first few days and months are so shocking, no?” she told the magazine about her own experience as a mother. “But it’s the best thing, because it means you’ll never put yourself first again. To always think about somebody else first is so healthy, and it’s where a lot of happiness can come from.”

In November, she told Vogue something similar. “My focus is being a mother, so I’m blessed I can work while keeping my family the priority,” she told the publication for a cover story. Still, while acknowledging that she prioritizes her children, she also says she doesn’t seek praise for that. “I don’t think of myself as a role model for anyone other than my children, as they see me every day, and the actions of their mother and father are the most important to them,” she said. “This is a huge responsibility, and my biggest mission in life is to try to do that well.”