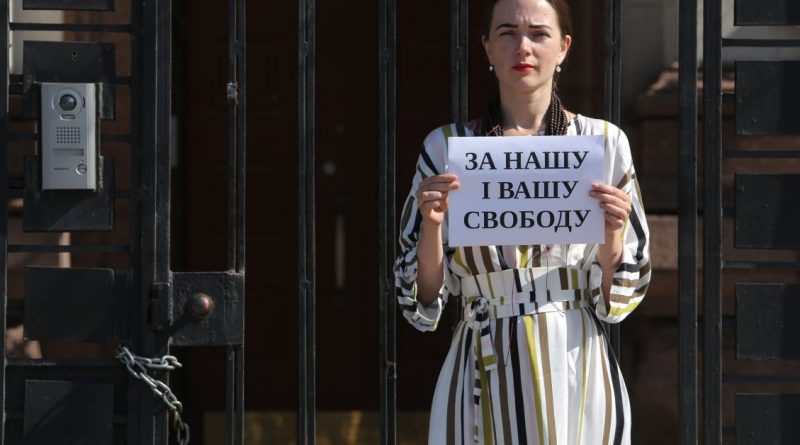 
Oleksandra Matviichuk heads Ukraine’s Center for Civil Liberties, which was awarded the Nobel Peace Prize on Friday along with Memorial, the largest human rights organization in Russia, and Ales Bialiatski, a democracy and human rights advocate in Belarus.

Founded in 2007 to strengthen civil society and democracy in Ukraine, the Center for Civil Liberties has this year focused on investigating and documenting war crimes against the country’s civilian population by the Russian military following its invasion. The Nobel Committee, in handing its highest award to human rights activists in neighboring countries, cited “their consistent efforts in favour of humanist values, anti-militarism and principles of law.”

I spoke with Matviichuk on Sept. 30 as she prepared to travel to New York for the Oslo Freedom Forum, which convened leading human rights activists from around the world five days before the Nobel was announced.

Andelman: How has human rights changed since the first Oslo Freedom Forum more than a decade ago?

Matviichuk; I can say that in parts of the region, of my region, we see how the negative trends of international law become more and more visible. And Ukraine is maybe the only state in our part of the world which in all these ten years has been trying to counteract this negative trend.

What do I mean? Eight years ago, Ukrainians started a revolution of dignity. They struggled for their right of democratic choice—just for the chance to build a country where the rights of everybody are protected, the judiciary is independent, government is accountable, and police do not beat peaceful student demonstrations. And Ukrainians paid a high price for this revolution of dignity. You know that police broke up peaceful student demonstrations in the main square of our capital. And then when Ukraine received a chance to provide a real democratic transformation, after the collapse of the Soviet Union regime, in order to stop us Russia started the occupation of Crimea and underground work in the Donbass, which resulted in the occupation of parts of the Lugansk and Donetsk regions.

This is the crucial point. Because in our region, Russia tried to dictate a trend of authoritarianism. And many people in the world think that this work by Russia started in February 2022 but the truth is this war started in February 2014. And the real reason is not that Putin is afraid of NATO–however he might try to describe his actions this year. The truth is that Putin is afraid of the idea of freedom. And all these past eight years, Ukrainians, have been trying to counteract this negative trend of authoritarianism in different countries, which we see in Russia, in Belarus in Kazakhstan, in Tajikistan, in Poland, in Hungary.

In parallel with defending our country and our people, in this war with Russia we try to provide democratic reforms. And I would point to the Chatham House report which said that in the four or five first years after the collapse of its authoritarian regime, Ukraine made much better, more positive impact developing democratic reform in the country then in the previous 20 years before.

What kind of organization should we have in place, that can react more effectively than the UN to solve problems of the sort being unleashed by Russia?

We are in the forefront of the battle between autocracy and democracy in this world. We are fighting for our right to have a democratic choice. And Putin? This work has not only a military but a value dimension. That’s why it’s not only the war between two states. It’s a war between two systems—authoritarianism and democracy. And Putin in his work is trying to convince Ukrainians and the whole world that our values–like democracy, rule of law, freedom of human rights–are artificial, are fake values. Because he tried to convince people, if they are real why couldn’t they protect you during this war? He’s tried to show that the whole UN system is unable to release even one single person from captivity, and this leads to a severe situation for myself as a human rights lawyer who has experience of 20 years defending human rights and freedom.

Now, for the question, how can you help Ukraine? The answer: please provide Ukraine with weapons. But this is [still] not a world which is safe to live in. When a human rights lawyer can’t use any legal instrument to defend people from Russian atrocities, this is a very dangerous world to live in. I totally believe that this period is temporal, and we have to make several important goals on the level of the international community because these problems cross international borders.

First, we need to reform international organizations because the whole architecture of international peace and security were laid in ruins by these Russian activities. Because the whole UN is incapable of doing anything with Russia as a permanent member state. And when the General Secretary of the UN was in Kyiv, a Russian rocket hit Kyiv and killed a journalist of Radio Liberty on that same day.

Second, we need to show justice for people. We have to create an international tribunal for war crimes against humanity and genocide and hold Russian perpetrators accountable. It’s important, not only for Ukraine, but for many nations in the world. Russia committed war crimes in Chechnya, even in Syria, in Mali, in Libya, in other countries of the world. Authoritarian leaders of other countries are inspired by this example. They start to think, yes, we can do whatever we want because there is no tool to push us to be in line with human rights. This is our task.

What can international human rights organizations do to help you in this task?

I have been documenting war crimes for eight years. After the large-scale Russian invasion we united with several dozen regional organizations. And working together for seven months, we have documented more than 19,000 episodes of war crimes. It’s different types of war crime. It’s deliberate shelling of residential buildings, churches, hospitals, schools. It’s attacks against evacuation corridors. It’s murders, torture, sexual violence and abductions of civilians in occupied territories.

And the question I asked myself is, for whom are we documenting all this? Because we are not historians. We don’t do it for national archives. We want to see Putin, those surrounding him, and Russian perpetrators who committed these crimes by their own hands held accountable.

Do you really see Putin jailed by the International Court of Justice? I mean, that’s fairly unrealistic, right?

This is a problem which I see as a lawyer—the gap of impunity—which Ukrainian people face, which Syrian people faced before us, people in other countries face. What do I mean? When national systems don’t want to prosecute or are not capable, because now the Ukrainian system wants to prosecute but is not capable. We have enormous amounts of war crimes, and the best prosecutor’s office in world could not effectively investigate 2,000 criminal proceedings which we have at our current moment. But the international system will provide an effective response because the court of justice is not about criminal responsibility. It’s another type of court. The only court which can bring people to individual responsibility is the International Criminal Court. The problem with the International Criminal Court? The ICC limits itself only to several selected cases.

At the Nuremberg trials, they convened a special court just for war crimes in the Second World War. Perhaps that’s something that really needs to be considered here?

We have to. We must move further with Ukraine. What do I mean? When we speak about the Nuremberg trials, it was an essential step in the past century to bring justice—but only after the Nazi regime had collapsed. Now we are in a new century and must make an additional historical step. We must bring justice regardless of whether a regime stays stable. Justice must not be dependent on the existence of the Putin regime. And that’s why we cannot, we must not wait.

How effective do you think the OSCE (Organization for the Security and Co-operation in Europe) has been?

After the Russian invasion, I was invited to open a special international event for the civil society of Ukraine. I said that the OSCE failed in its mandate to preserve security in our region. And this is a time for a broader conversation for several reasons which I named in my speech. The first reason is that human rights, when separated from the security issue and economic issues, became like something secondary. The main political decisions were based not on human rights values. Even in this extreme situation, human rights has the same importance as security and economics. And states that violate systematically human rights for years pose threats for the whole region.

I was told that human rights wasn’t central and not present in the rooms where decisions were taking place. But now we have the voice of armies exactly because the voice of civil society wasn’t heard properly.

Putin has just made his declaration annexing the four eastern regions of Ukraine…and now the US is imposing more sanctions.

He annexed these regions. He signed the document joining these oblasts of Ukraine to the territory of Russia, and he proclaimed that now they are Russia. In response our president replied that Ukraine will apply for urgent membership in NATO.

We live in very dramatic times, and political leaders of the world have to take historical responsibility because for decades, I’ve seen that political leaders behave like they believe the problems we face will vanish. But the truth is that these problems will not vanish. They have to take responsibility and to solve these problems for the next generation and not think only about the electoral period or the future of their own parties.

First of all, they have to restore the whole international system of peace and security and make the international mechanism of human rights effective. It is their responsibility for the whole world. Ukraine is only one of the examples of a global problem, and this disease manifests itself globally. Russian war is a disease.

Second, we live in a very interconnected worked and only spreading freedom can make our world safer. And if political leaders will not take this historical responsibility, people can take this historical responsibility. All of my experience as a human rights defender has showed me that ordinary people have much greater impact than they can even imagine. And massive mobilization of ordinary people around the world can change the world’s history much more quickly than any UN intervention.