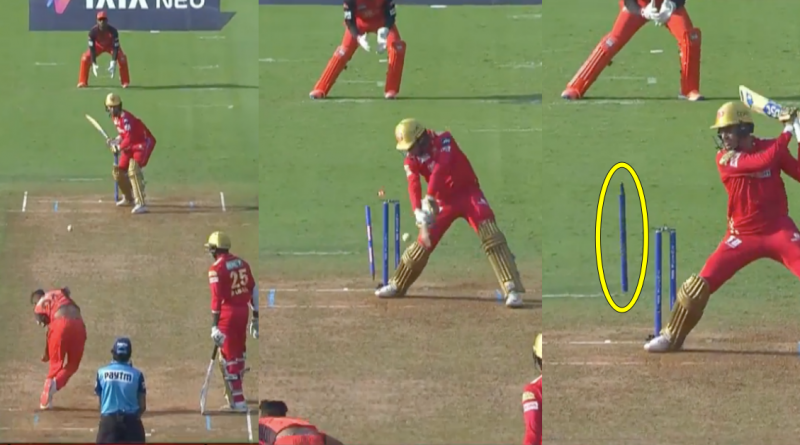 Umran Malik bowled a brilliant last over against Punjab Kings as he picked up three wickets in his last over. The 2nd wicket of the over was that of Rahul Chahar who couldn’t put his bat to the ball at all.

The ball was bowled at a sheering pace by Umran Malik and was too good for a lower-order batter.

Earlier in the day, Kane Williamson won the toss for the 6th consecutive time in the league and opted to bowl first. His bowlers responded well to the call as they picked up wickets at regular intervals.

Umran Malik was the best bowler on the day as picked up 28-4 in his 4 overs. The best over of the innings was the 20th over in which SRH picked up 4 wickets and gave away no runs. Umran Malik picked up 3 wickets and the last wicket was a runout.

Umran Malik had clean bowled Shreyas Iyer in the last game with a fast yorker, he bowled a very similar delivery to Rahul Chahar who tried to carve away the ball but wasn’t able to, as the delivery was too good for him.

Umran Malik was targeted by Liam Livingstone who scored yet another half-century for his side, but when Malik came into the bowl the last over, Livingstone was already dismissed.

Umran Malik’s brilliant last over meant that PBKS could manage only 151 runs on the board who were without their regular captain Mayank Agarwal. Shikhar Dhawan is leading them in the game. The last time he led in the IPL was in 2014 when he was SRH’s captain.

This performance would give Umran Malik a lot of confidence going forward in the tournament.

Also Read: IPL 2022: We Do Not Find An Indian Bowler Of Deepak Chahar’s Caliber – CSK CEO Kasi Viswanathan On Replacing The Injured Pacer

PBKS vs SRH Watch – Umran Malik Cleans Up Rahul Chahar With A Yorker: