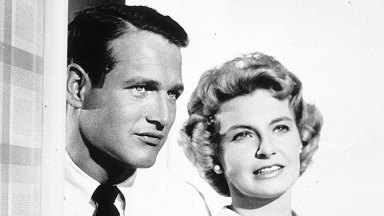 
Paul Newman has the incredible love story with his second wife Joanne Woodward on display in the new, six-part documentary The Last Movie Stars. The HBO film, directed by Ethan Hawke, takes a close look at the Hollywood legends’ relationship that lasted half a century. “I fell more in love with them as I did it,” Hawke told Turner Classic Movies host Ben Mankiewicz, per CBS News. “And the more you care about them, the more you want to do the story justice.”

While Paul became a matinee idol with his iconic roles in Butch Cassidy and The Sundance Kid, The Hustler and Cat on a Hot Tin Roof, it was his enduring marriage with Joanna that piqued fans’ interest as it broke the standard for Tinseltown couples. However, before he could call Joanne his wife, he needed to end his first marriage to Jackie Witte. Find out more about these amazing women who stole the late heartthrob’s heart, below.

Paul was born on January 26, 1925, in Shaker Heights, a suburb of Cleveland, Ohio. After attending Ohio University for a bit, he enlisted in the Navy, where he served as a radio operator in World War II. After his duties, he returned home and married his first wife, Jackie, on December 27, 1949. The couple were both actors and worked on their craft before welcoming son Scott in 1950, daughter Susan in 1953 and another daughter named Stephanie a year later.

While struggling to find work in the beginning of his career, Paul eventually struck gold when he landed a few roles on Broadway. One of his first, gigging as an understudy on Picnic, was where he first met Joanne, also an actress. Their love affair would ultimately lead to Paul and Jackie getting a divorce in 1958.

Born on February 27, 1930 in Georgia, Joanne would go on to study acting at Louisiana State University before moving to New York City where she would continue her education at the Actor’s Studio. She soon became a darling of the small screen, acting in such TV productions as the Goodyear Playhouse and Hitchcock Presents. Her stellar skills transferred over to film, where she astounded audiences and critics alike for portraying a woman with multiple personalities in 1957’s The Three Faces of Eve. The role would garner Joanne an Academy Award for Best Actress, which she was nominated for three more times.

During the height of their careers, the power couple welcomed three daughters together: Elinor Teresa “Nell” (1959), Melissa Stewart (1961), and Claire Olivia “Clea” (1965). They would defy the status quo of Hollywood couples and remain married for 50 years until Paul’s death from lung cancer on September 26, 2008. Joanne currently resides in Westport, Connecticut.