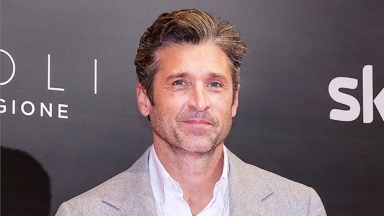 
Mr. McDreamy has a new look! Patrick Dempsey, 56, wowed the crowd at the D23 Expo: The Ultimate Disney Fan Event on Friday, Sept. 9 with a brand new platinum blonde hairdo. He stood out on stage as he received a Disney Legends award to kick off the exposition in a light gray double-breasted suit that seemed to bring out the silver undertones in his hair. His bold new look could be seen closer up as he got his hands molded and completed the process of becoming a Disney Legend, as seen in the photo below.

The new ‘do is for his role in Michael Mann’s Ferrari, in which he plays PieroTaruffi, an Italian racecar driver who was at the peak of his career in the mid-1900s. Speaking of his look at the expo, Patrick told Variety that his hair will be blonde for “a few more months” and that he thinks “it’s great”. He also opened up about people’s mixed reactions to his nearly-white hair color. “It’s fun to do something different and you know, unfortunately or fortunately, I’m known for my hair, so this has really jacked up a lot of people. They don’t know how to embrace it. Either they love it or they hate it,” he noted.

Patrick also confirmed that blondes do have more fun than brunettes. “I have to tell you, it’s true,” he smiled. “I’m in Italy driving racecars so I can’t complain,” he added, proving his point.

The Enchanted star was also smiling, and even a bit tearful, as he accepted his Legends award at D23. During his speech, seen here, he noted how grateful he is to have a nearly four-decade career in the business and the “incredible platform” he was given thanks to Grey’s Anatomy — a platform that allowed him to open up the Dempsey Center For Cancer Hope and Healing in his hometown in Maine after he saw his mom fight ovarian cancer for years. “I have had such success with [Disney]. It’s been remarkable,” he humbly stated. “And to be able to do this work — number one, to be working actors — … and to be able to use that for something that’s very positive, especially in the world we live in right now, you can see and you can feel from these images, what happens when we come together as a community, how we work together, how we respect each other, how we love each other, and how we understand different positions, and through cinema, through TV, we can do that. We can help and we can teach.”

He concluded his speech by accepting his award with “humility” and “gratefulness”, and said he hopes to be back on the stage 30 years from now. Perhaps in 30 years from now, he’ll have dyed his hair a new fun color.