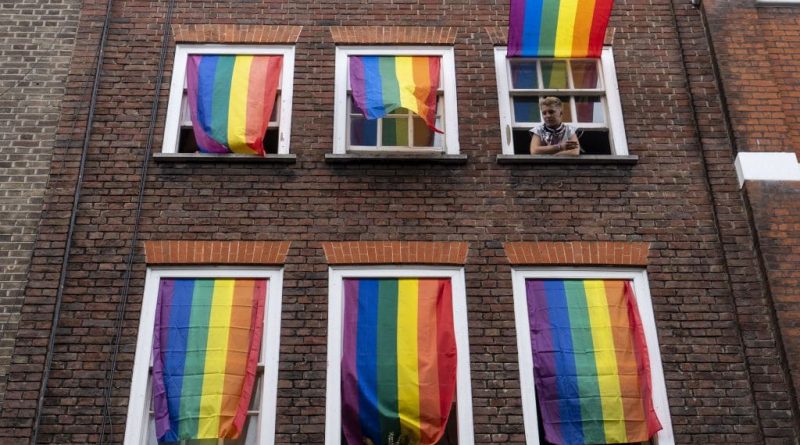 Rainbow flags cover a set of windows in Soho at Pride in London in 2019. (NIKLAS HALLE’N/AFP via Getty)

LGBT+ people faced worsening mental health along with an uptick in abuse and domestic violence during the coronavirus pandemic, a new study has found.

The National Centre for Social Research analysed survey data collected by Intercom Trust, LGBT Foundation and Stonewall during April and June 2020 to better understand the impact of the pandemic on LGBT+ people in the UK – and the results are striking.

Queer people faced greater levels of depression and anxiety in the early months of the pandemic, with social isolation and loneliness driving the surge. Most people lost access to affirming safe spaces and communities during lockdown, which led to more people experiencing mental health issues.

The research also suggests that LGBT+ people from Black, Asian and other ethnic minority communities, along with disabled people, were disproportionately affected by mental ill health during the pandemic.

Younger LGBT+ people also faced worse outcomes, as did trans people of all ages. Trans people’s mental health was hit during lockdown and many experienced worsened gender dysphoria because of the disruption to gender-affirming care. The pandemic also resulted in heightened feelings of loneliness, depression and anxiety among trans people, the study found.

There was also a higher incidence of self-harm, suicidal ideation and suicide attempts among LGBT+ people during the pandemic, with younger people and trans people worst affected.

Crucially, the study also found that LGBT+ people experienced greater threats to their personal safety in the early months of the pandemic. Some queer people found themselves stuck in unsupportive homes during lockdowns, which led to feelings of depression, anxiety and loneliness.

Some LGBT+ people experienced domestic violence during lockdown, with many finding themselves stuck at home with abusers. Tragically, there was also an uptick in the number of LGBT+ people facing harassment and violence outside the home, possibly due to queer people being more visible in public during lockdown.

The abuse wasn’t limited to real-life exchanges – LGBT+ people also faced increased online harassment during the pandemic’s early months. This might be due to increased hostility towards the community from the media, the study found.

Some also experienced financial issues during the pandemic. Trans people were found to be at greater risk of homelessness, as were LGBT+ migrants.

The study found that LGBT+ people prefer to access support from LGBT+ specific services, but these organisations have faced a financial hit in the last couple of years and for some, the future is uncertain.

Nathan Hudson, lead author on the study, told PinkNews that compiling the research was a challenge because LGBT+ experiences are generally under-researched.

“Based on what we did find, I think one of the most striking things is the impact of COVID on younger LGBT+ people,” Hudson says. “The mental health impacts on LGBT+ young people are particularly stark, and what that seems to be about is young people having their contacts severed during lockdown, so they really lost that support.

“What’s also happened is that some young people were forced to live in unsupportive, if not quite hostile, home environments at the same time. Certainly any little bit of comparative research we included in this review said young people are really facing the brunt of mental heath impacts during COVID.”

Hudson was also struck by the impacts of the pandemic on trans and non-binary people.

“We know that trans and non-binary people face significant disadvantage and inequality, which has been exacerbated during COVID. Poorer mental heath outcomes, greatly restricted access to gender-affirming treatment, that kind of thing.”

Another “difficult” area for researchers is the impact on LGBT+ Black people and other queer people of colour. The data is limited, meaning researchers can’t be entirely sure what the issues are.

“What I think would probably be the case is these underlining inequalities that are exacerbated and intersectional experiences of racism and homophobia and transphobia really coalescing in the context of COVID and reinforcing a lot of these negative experiences LGBT+ people of colour tend to have,” Hudson says. “It’s a difficult one because there are really big evidence gaps.”

Another notable issue that arose in the research is domestic violence – an area that is “significantly under researched”, Hudson says.

Hudson says significant work will have to be undertaken to address the impacts of the pandemic on LGBT+ people if the community is to recover.

“I think the first thing that’s needed is acknowledgement that there are disproportionate impacts for LGBT+ people,” he says. “We know there are pre-existing inequalities, we know there’s pre-existing discrimination. What we need to do when thinking about our recovery from COVID is understanding those additional layers of support that LGBT+ people need. What that support looks like is a really interesting question, and one of the main things we’re interrogating.

“We know LGBT+ people need additional resources – they need bespoke resources. We know we need training for voluntary and community organisations. What those groups need is support, money, real policy behind them to help them address some of the effects of COVID, particularly around the mental health impact. I think that’s probably one of the most pressing things.”