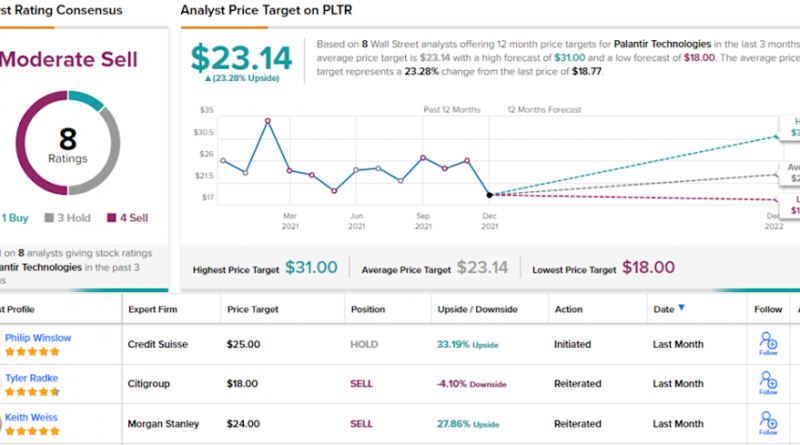 
Palantir’s (PLTR) stock performance in 2021 has been shoddy, with the shares down 20%. According to William Blair’s Kamil Mielczarek, investors could be in for a rough 2022 as well.

Mielczarek’s downbeat view is on account of a dearth of new contracts heading the big data specialist’s way. In the September quarter (Q3) – normally the strongest quarter of the government fiscal year – the analyst bemoaned the lack of any “significant” new U.S. government contracts.

And according to the investment firm’s Dotted Line government tech contract tracker, the “drought” for U.S. government nonclassified contracts (approximately 35% of total revenue), has mostly continued in Q4, which is now coming to an end.

“We think Palantir’s recent government struggles are a function of the continuing resolution, elevated competition, the lumpy nature of government contracts, the lack of new COVID related work, and protracted procurement cycles for large contracts,” the analyst explained.

Because the 2022 defense budget has yet to pass, U.S. government bodies procuring tech industry services have decelerated. And while the quarter has seen a renewal for the VANTAGE and Brown Heron contracts, these were “fully expected.”

Mielczarek estimates Palantir’s U.S. government revenue growth has slowed down from 83% in the March quarter to 48% in the September quarter. The analyst thinks that even if the company does manage to procure new contracts over the next few months, government “growth deceleration” could still be significant next year. The analyst expects U.S. government growth will eventually “normalize” in the 15% to 25% range.

If that wasn’t worrying enough, competition in the segment is rising.

A $500 million Department of Defense OTA contract was recently awarded to C3 AI. And on December 6, Booz Allen was the recipient of a $70 million contract for the Repository for Analytics in a Virtualized Environment (RAVEn) system, further giving credence to Mielczarek’s claim that the Department of Homeland Security (DHS) is “looking to migrate” its data analytics system from Palantir to Booz Allen.

Based on all the above, Mielczarek anticipates “further downside” in 2022 and rates PLTR an Underperform (i.e., Sell), without suggesting a price target for the shares. (To watch Mielczarek’s track record, click here)

The rest of the Street’s take presents an interesting conundrum. Rating wise, the analyst consensus views the stock a Moderate Sell, based on 4 Sells, 3 Holds and 1 Buy. However, the $23.14 average target suggests shares are currently undervalued by 23%. It will be interesting to see whether the analysts upgrade their ratings or reduce price targets over the coming months. (See Palantir stock forecast on TipRanks)

See what top Wall Street analysts say about your stocks >>

Disclaimer: The opinions expressed in this article are solely those of the featured analyst. The content is intended to be used for informational purposes only. It is very important to do your own analysis before making any investment.