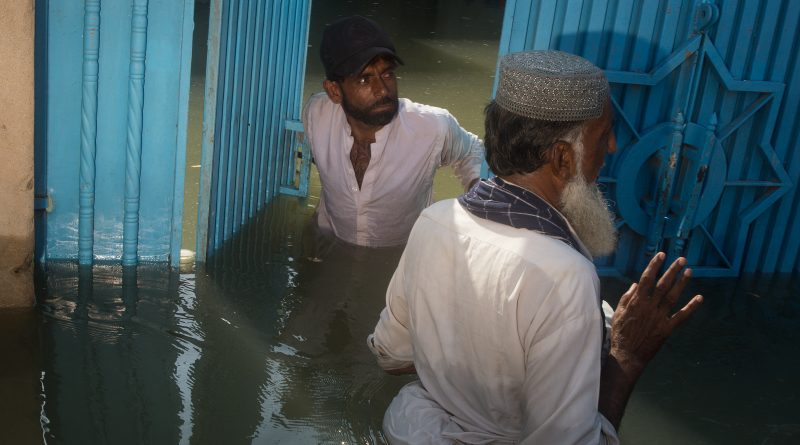 
After a Pakistani man rescued a neighbor from drowning, he stopped for a moment and put his hand on his head. “I lost my own son in this water a few days ago,” he told local climate journalist Zuhaib Pirzada. The man who needed rescuing had fallen into the water while trying to cross a flimsy make-shift bridge made out of wood, Pirzada says. The original bridge, which allowed people to cross between the village of Hayat Khaskheli and the city of Jhuddo in lower Sindh, was destroyed in an attempt to allow trapped water to flow out.

Pirzada still has trouble talking about the incident and the man’s pain. He learned about the tale while accompanying Karachi-based photographer Hassaan Gondal on a three-day reporting trip for TIME to capture the record flooding in Pakistan. Gondal visited the cities of Thatta and Jhuddo in Sindh, the country’s worst-affected province. “The hardest thing when I was taking a photo was how to keep myself emotionally at a distance,” says Gondal, who captured the rescue on camera.

Residents rush to rescue a man from drowning on an embankment between Hayat Khaskheli village and the city of Jhuddo, Sept. 9.

Bano and Abdul Ghani inside their flooded house in Jhuddo, Sept. 9.

Pakistan’s catastrophic floods have inundated one-third of the country—displacing over 30 million people and pushing more than 600,000 people into relief camps. The government has acknowledged a dire food and medicine shortage. Even as rainfall has decreased, pools of stagnant flood water are collecting in Sindh and Balochistan provinces—still reaching half as high as electricity poles in some areas.

“Especially in Sindh, because it’s the lower part of the Indus [River] basin, this water is just not being drained out into the sea. It’s just hanging about stagnant because of the way that the river has been engineered,” says Ayesha Siddiqi, a geographer at the University of Cambridge.

An establishment frequented by the remaining residents of Rajo Nizamani where they gather to watch news while waiting for the flood water to clear, Sept. 10.

Abdul Ghani at the entrance of his flooded home in Jhuddo, Sept. 9.

Residents of Faqir Jo Goth being evacuated on Sept. 8.

There’s no place for the water to go, Siddiqi adds, because the natural flow of water is disrupted. Levees and dams in Pakistan were designed to control the flow of water and have amplified the impact of flooding. “Why is it that the agricultural heartland of Pakistan is underwater and not the big cities; there is a very strong colonial imperative from the time of the British Raj ruling in South Asia that allowed you to break embankments to flood the rural heartland so that the more populated urban areas are not flooded,” she says.

And there could be further flooding in Sindh. In Jhuddo, residents have been maintaining a 24-hour watch along the city’s embankment to detect any signs of a potential breach, Gondal says. If they notice trouble, they immediately work to add more sacks of mud for added protection.

A resident of Jhuddo sleeping on a temporary embankment to keep the city from further flooding, Sept. 9.

Residents picking belongings from their flooded homes in Jhuddo, Sept. 9.

Even those who are safe in rural provinces must still contend with enormous challenges. Farmers in Sindh and Balochistan, for example, have lost the livestock they depended on for their livelihoods. “Living life has become very hard because the person who only had livestock and depended on that to live and it died in the flood, how will he go on?” asks Pirzada.

As a result of the stagnant flood water, outbreaks of skin disease, malaria, and dengue are also increasing. Abandoned homes look like they will start falling apart.

Meanwhile, the catastrophic damage has raised scrutiny over the responsibility of wealthier nations in the global north. The U.S. and European nations emit drastically more CO2 than Pakistan and other countries, who disproportionately face the harsh effects of an increase in global warming.

Pakistan is reported to have received more than 3 times its usual rainfall in August, making it the wettest August since 1961, according to a study by World Weather Attribution, a group of mostly volunteer scientists.

“It’s really difficult to argue that this disaster would have been in any way this extreme had human-induced climate change not played a part,” Siddiqi says.

A shopkeeper in Hayat Khaskheli, Jhuddo, alongside his inundated shop, Sept. 9.

Residents of Rajo Nizamani in Sindh province wading through flood water to get to their home, Sept. 10.