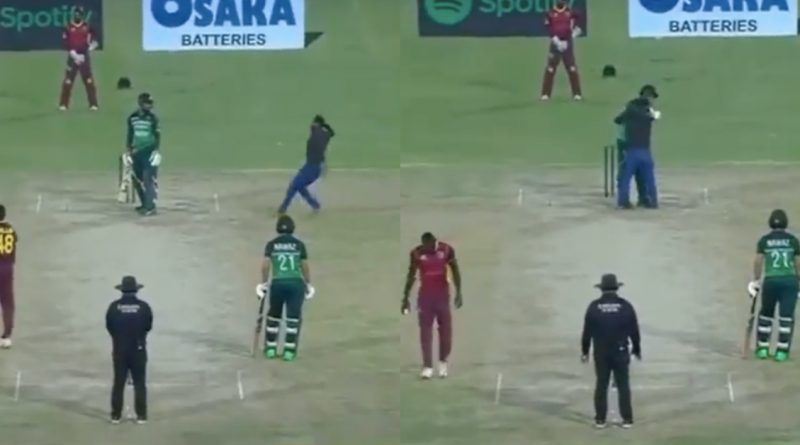 
Shadab Khan, the vice-captain of Pakistan’s limited-overs team, was the focus of attention during the second One-Day International between the hosts and the West Indies at the Multan Cricket Stadium on Friday (June 10). When a pitch intruder stormed onto the ground from the stands during the first innings of the match, the star all-rounder was on the batting crease.

While everyone was taken aback by the individual’s abrupt and unexpected entrance onto the playing field, Shadab remained composed and gave the person a hearty hug. The individual was overjoyed at the opportunity to meet the Pakistani cricketer and raced back to the stadium to celebrate his achievement. A video of the same has gone viral on social media.

Ian Bishop, a West Indies cricket veteran who is a pundit for the series and witnessed the incident firsthand, praised Shadab. “Great moment just now when a spectator ran onto the field. Instead of being violent with him (because it could have been dangerous, plus COVID), Shadab Khan hugged him and sent him on his way. #Beautiful. P:S, I understand all the reasons why that is frowned upon,” wrote Bishop on Twitter.

Great moment just now when a spectator ran onto the field. Instead of being violent with him (because it could have been dangerous, plus COVID), Shadab Khan hugged him and sent him on his way. #Beautiful. P:S,,,I understand all the reasons why that is frowned upon.

Shadab’s return to international cricket after a long injury layoff has already proven to be an eventful one for the star all-rounder. After dismissing Sharmarh Brooks with an incredible one-handed catch in the opening game, the 23-year-old was the buzz of the town.

When it comes to the game, Pakistan captain Babar Azam won the toss and choose to bat first. The hosts scored a total of 275 points. Babar, the captain, continued his remarkable form by scoring 77 runs in 93 balls. Imam Ul Haq hit another half-century, this time for 72 runs.

With one match remaining in the series, a win for Pakistan will secure a series victory. In a dramatic high-scoring clash, they won the series opener by five wickets against the Nicolas Pooran-led side.