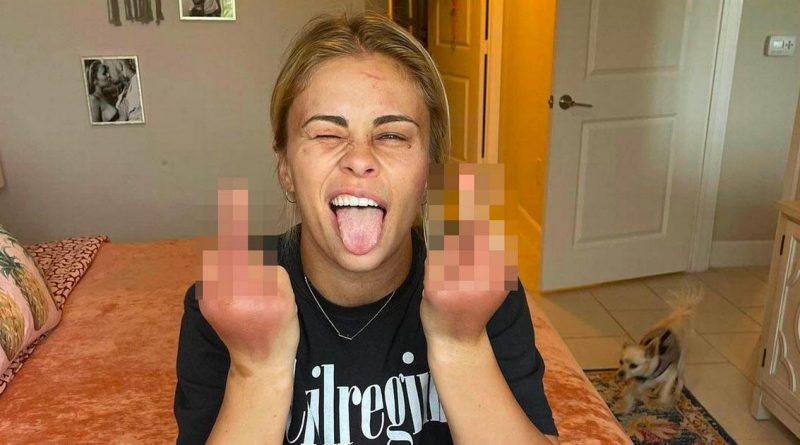 Paige VanZant has promised to make a “major comeback” after picking up a number of marks during her fight with Rachael Ostovich on Friday night.

The ex-UFC star lost her second straight bare-knuckle boxing match, but wasn’t as badly hurt as some more recent fights, showing off a few scratches, but not many serious injuries.

VanZant is one of the most popular fighters in the sport, and is paid handsomely by BKFC for her role in the promotion, where she has fought Britain Hart as well as Ostovich in her first two bouts.

“Guess what b****es???!! I’m still smiling!!!” VanZant said in an Instagram post following the result, in which she showed off some of her battle scars, including some very swollen hands.

“My story is full of setbacks, road blocks and detours. But, it is also filled with major comebacks, peace in my soul and a grace that saved my life.

“I promise you this, I would endure this pain everyday of my life over the pain of regret. I am going to keep chasing my dream one step at a time.

“99.9% of the people on earth would not dare do what I do. This story will be even better then my first. And if you haven’t read my book before click the link in my bio.

“That is real pain. This is just a bad chapter. And to anyone out there struggling. Pain is only for a moment.

“The world may be dark and love to hate on you, but darkness does not drive out darkness only light can do that. So DO NOT STOP SHINING!!!!”

VanZant had beaten Ostovich in their first meeting while both signed to the UFC in 2019, but wasn’t able to repeat that result in the rematch on Friday night.

The Oregon native was all business in the lead-up to the bout, and looked the more experienced fighter as the bout began, having made her debut in the sport earlier this year.

But Ostovich settled quickly, and dominated the bout over the course of the five-round contest to claim her first competitive win since December 2017.

She landed the heavier shots in the second and third, but the highlight of the performance was a beautiful right hand in the fourth that stunned VanZant, and almost saw the fight stopped.

Ostovich was announced as the winner by way of unanimous decision, winning 48-47 on two scorecards and 49-46 on another, which enraged VanZant, who appeared to think she had done enough to win the contest.

VanZant was cornered by her husband and Bellator star Austin Vanderford, who could be heard telling her that she would win the bout if she survived the final round, but the judges appeared to disagree with his assessment.

Ostovich has said that she expects to return to bare-knuckle boxing, while it remains to be seen where VanZant will compete, and if she will return to MMA.