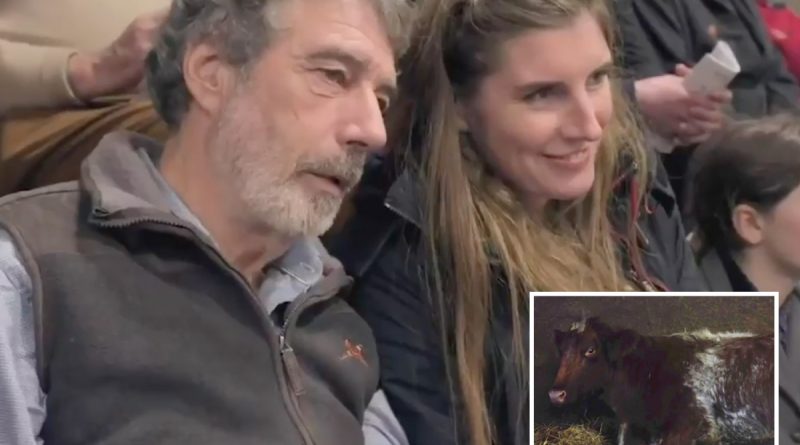 OUR Yorkshire Farm star Amanda Owen left her husband Clive in shock after she secretly purchased a COW behind his back.

The shepherdess was on the look out for a bull to mate with their female cows as she headed to an auction two hours away from Ravenseat farm.

Alongside children Miles and Edith, the husband-and-wife duo avidly looked for a suitable animal at a reasonable price.

But while Amanda, 46, was keen on a large red-coloured bull, husband Clive, 56, didn’t want to waste money on a cow outside his criteria.

Despite going to buy a bull, the mum-of-nine couldn’t help herself but place several secret bids on a series of female cows she liked the look of.

“We’ve kind of got a lot of cows and heifers and we kind of need a boy cow – because you know how that works,” Amanda said ahead of the auction.

“This bull comes into here, this massive red bull and you wouldn’t even bid on him?” she asked her husband, who insisted he didn’t want “a red bull”.

“Aren’t you tempted?” Amanda persisted, to which Clive quickly replied, shutting her down: “No, he’s not doing it for me.”

But Amanda kept watching the auction, as Clive tutted towards their children: “There’s one coming in that’s caught your mother’s eye.”

As Clive watched the children, Amanda entered a tense bidding war fro the female cow she was admiring before the hammer came down.

The auctioneer pointed towards Amanda as the winner, to which Clive exclaimed: “You? No you didn’t! You daft bugger!”

Amanda laughed nervously as she asked if her husband with “annoyed at her”, to which Clive mumbled a response under his breath.

“I think we better go, we’ve done enough damage here,” she concluded, before fitting the bill of £3362.40 for the stunning cow.

“We got a cow today. I’m beginning to think she’s not just listing to everything I say,” Clive said as they headed home.

“It is a lot of money, but good cattle, livestock is expensive and it’s a lovely thing and it’ll go home and become part of our herd.

“She’s a very clever woman, she has bought a good one,” Clive admitted, taking a closer look at the family’s latest addition.

Our Yorkshire Farm is available to watch on 5oD now.