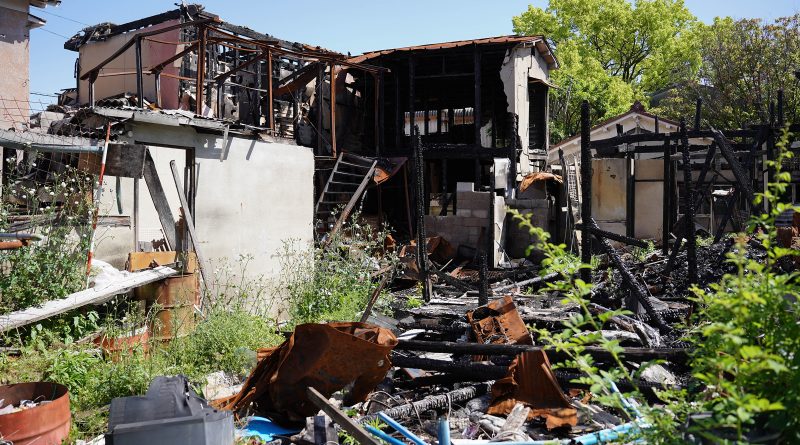 
Immediately after Shinzo Abe was assassinated by a gunman on July 8, a rumor quickly spread on Japanese social media. It falsely claimed that the suspect was a “Zainichi Korean.” The term generally applies to descendants of Korean people who emigrated to Japan between 1910 and 1945—a period when Japan occupied Korea. They are the most targeted minority in Japan and suffer from virulent online abuse.

Last summer, online hate turned into real life violence. A 22-year-old man allegedly set fire to and destroyed seven buildings in Utoro—the ethnic Korean district of Uji, a city of some 185,000 on Japan’s main island Honshu. Although there were no casualties, the attack horrified Zainichi Koreans across the country.

On August 30, he was sentenced to four years in prison.

The suspect said that the purpose of the attack was to make Koreans afraid to live in Japan. According to media reports, he was radicalized by reading anti-Korean comments that had been posted by readers of Yahoo! News Japan and one of his motives was to earn notoriety among those users.

Yahoo! News Japan reportedly has just 70 content moderators to police an estimated 10.5 million comments each month. It is the most popular news site in the country, and articles about the Utoro incident attracted a torrent of hateful comments and disinformation about Zainichi Koreans.

In a written statement to TIME, the platform said it uses “AI and [moderators] to properly eliminate some malicious users and posts” and that it has cooperated with government agencies to do so. But many of those posts remain on the site today.

Around the world, and on every continent, major tech platforms have attempted to strike a balance between allowing people to speak freely while protecting others from users who post hateful content. To do so, they’ve implemented content moderation practices that are often inadequate or particularly hard on moderators—even despite warnings from users and employees who moderate content. Japan is no exception.

But in Japan, unlike the U.S. and other countries, online problems may fester out of sight. Japan’s digital culture receives little attention from the international media and researchers beyond high-profile pop culture phenomena like anime and video games. Matt Alt, a Tokyo-based writer, says this is in part because deciphering Japanese online discourse requires a high degree of Japanese literacy. Within the country, what happens online tends to stay online, says Alt: “There is sort of a barrier between online happenings and mass media in Japan. More so than the West.”

The aftermath of damage remains on the arson site in Utoro Zainichi Korean settlement in Uji, eight months after the arson attack, on April 30, 2022 in Kyoto. A 22-year-old Japanese man is under arrest in connection with the incident.

How hate speech spreads in Japan

Japanese far-right netizens called “netto-uyoku” flock to Yahoo! News Japan and other platforms like Twitter and Japanese Wikipedia that allow anonymity. They use the sites to spread historical revisionism and stoke xenophobic views of Korea and China.

Twitter has over 45 million Japanese users, making Japan its second largest market. It has a policy that “prohibits statements of exclusion based on race or ethnicity,” according to a Twitter spokesperson, who specifically added that “statements of exclusion or violence towards the Zainichi Koreans will be subject to enforcement.”

But Zainichi Koreans are frequent targets of abuse on the site, where they are derided as “cockroaches,” “cancer,” “illegal immigrants,” and “chon” (a highly derogatory term), while being told to “go back to your country.” The last attack is particularly painful, given that the ancestors of many Zainichi Koreans were forcibly sent as laborers to Japan during the colonial era. One Zainichi Korean described it to TIME as “the murder of the soul.”

Meanwhile, with one billion monthly page views, Japanese Wikipedia is the most visited edition of Wikipedia after English. It has played a crucial role in whitewashing war crimes committed by Imperial Japan in China and Korea. The Zainichi Korean page contains many misleading claims and reinforces a stereotype of Zainichi Koreans as criminals. One of Wikipedia’s volunteer editors said in an email to TIME that “Japanese Wikipedia has been hijacked by netto-uyoku.”

The Wikimedia Foundation, which operates Wikipedia, dismisses the claim. It said in a statement to TIME that it had investigated historical revisionism on Japanese Wikipedia and found “some presence of right-wing users who have possibly attempted to control the content on certain pages” but the abuse didn’t seem frequent or sufficient enough to enforce a ban. The foundation subsequently added that its “volunteers have included more relevant, verified historical context in [disputed] articles,” although much disinformation remains.

Daisuke Tsuji, an associate professor at Osaka University, who has collected data on netto-uyoku for over a decade, says “Only about 2% of internet users in Japan are netto-uyoku.” But their viewpoints are over-represented on the internet, partly because they are among the few Japanese willing to talk about politics, he says. “Unlike in the U.S. or U.K., Japanese don’t really talk about politics in daily conversation. Even on the Internet, it’s a small segment of the population that engages in political discussions.”

Furthermore, the Japanese tendency to avoid conflict is also reflected on social media. In an analysis of Twitter in Japan, researchers found that plenty of progressives were on the site, but they weren’t discussing the same topics as netto-uyoku. Since liberals aren’t actively engaged in creating counter narratives, the viewpoints of netto-uyoku are rarely challenged.

Such cultural factors, plus the normalizing of hate on the Internet, have enabled netto-uyoku to create the impression that their views are more mainstream than they actually are. Their words have the potential to harm hundreds of thousands. There are at least 300,000 people in Japan who are categorized as “special permanent residents,” almost all of whom are Zainichi Koreans—and many thousands more may consider themselves part of this group because of their heritage.

What’s happening to Zainichi Koreans isn’t unique, of course. Minority communities are targeted online all over the world, as a reflection of what happens offline, says Ariadna Matamoros-Fernandez, who studies digital media at Queensland University of Technology. But most major social media platforms struggle to understand how hate is articulated in non-U.S. contexts, she says.

The problem is exacerbated in countries without a proper legal framework to protect minorities. Activists in Japan have been pushing for anti-discrimination laws. Japan passed the Hate Speech Act in 2016, but activists say it didn’t go far enough because it prescribes no penalties. They also say that the lack of explicit government condemnation emboldens those perpetrating ethnic hate.

Anti-racist groups (L) try to block Japanese nationalists from marching on the street during a rally demanding an end to hate speech in Kawasaki, Japan, on July 16, 2017. Scuffles erupted when right-wing activists marched with their slogans, flags, and racist speech, forcing police to intervene.

Frustrated by the lack of official action, some Zainichi Koreans, and Japanese people with Zainichi heritage, are mounting legal fights to stop the cycle of discrimination, even though lawsuits in Japan are uncommon.

In 2014, Osaka-born Zainichi writer Sinhae Lee, sued Zaitokukai, a far-right hate group known for staging anti-Korean rallies, for harassment both online and offline. Lee estimated that she was receiving about 5,000 racially and sexually abusive tweets per day, but after she filed the case she says she got as many as 20,000 daily. She says Zainichi Korean women are especially targeted because “we’re at the bottom of the bottom of society.”

She won the case in 2017, but it took a toll: Lee has suffered from weight loss, insomnia, and stress-related hearing loss. The harassment on Twitter hasn’t stopped, but when she reports these posts to Twitter, she’s told that they don’t violate Twitter’s rules.

Last December Natsuki Yasuda, a well-known photojournalist, filed a lawsuit against two anonymous Twitter users who posted discriminatory comments about her late father, who was a Zainichi Korean.

Her suit came in the wake of another, by Choi Kang I-ja, who sued a man who repeatedly harassed her on his blog and Twitter. She also received a death threat at work and has been wearing a protective vest, fearing for her life.

The area around her workplace, the Sakuramoto district of Kawasaki City in the Greater Tokyo area, is where many Zainichi Koreans live. It’s also a popular site of anti-Korean hate rallies, and its residents have been threatened with violence.

“Platforms need to enforce their own guidelines against hate speech,“ says Hajime Kanbara, a human rights lawyer, who represents both Yasuda and Choi. He says that American companies like Twitter make filing a lawsuit against anonymous users difficult because they withhold user identities. “I want them to respond more flexibly to user disclosure,” he says. (Japan now has a law, the Provider Liability Limitation Act, that allows victims of online defamation to request disclosure of the sender’s details).

In June of this year, the Japanese parliament passed legislation that makes “online insults” punishable by up to a year in prison. But precisely what it covers is vague, and activists and lawyers worry that the measure will be used to protect powerful people in the establishment, while having little effect on countering hate speech.

“It’s very hard for victims to file a complaint or go to civil court,” says Sinhae Lee. Rather than placing the burden on the victims, she says that the platforms, the government, and society should do more.

Last summer’s arson attack in Uji could be a signal of what’s to come, unless the government and the platforms take action, says Kanbara, who warns of “a hate crime with numerous casualties.”