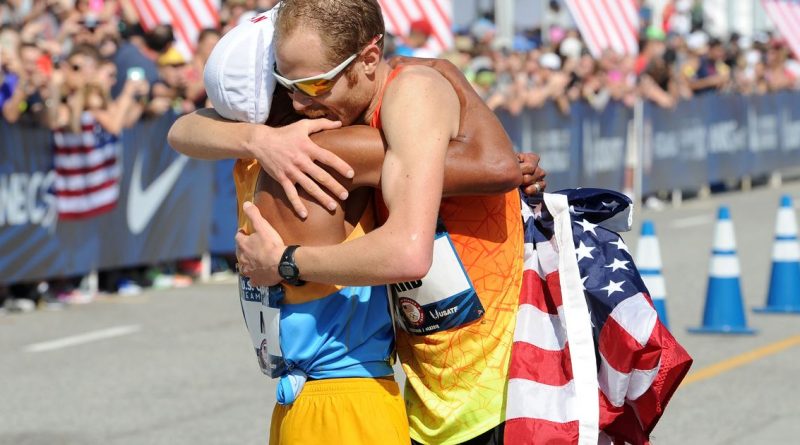 Meb Kelflezighi and Jared Ward celebrate after qualifying for the Olympics at the U.S. Olympic Team Trials Men’s Marathon on February 13, 2016 in Los Angeles, California (

The world of gruelling training and fitness in order to be a marathoner isn’t the only area that Jared Ward dedicates his time to – he also spends his time teaching statistics to university students.

What’s most amazing about his background is that he successfully combines the two interests despite them being poles apart, in order to bring his best performance to his Olympic sport.

Best known for placing sixth in the marathon at the 2016 Rio de Janeiro Olympic games, Ward is a long-distance runner who competed against 155 athletes from 79 countries.

However, the 32-year-old also holds down the day job of being a statistics professor at Brigham Young University (BYU), Utah, where he also completed both his Bachelor’s and Master’s degrees.

Upon his initial arrival on campus as an undergraduate, Ward was tasked with choosing what his major would be by one of his athletic advisers. He opted to major in statistics having always enjoyed mathematical-based subjects.

Fast forward to one month after his graduation and the statistics department at BYU offered him a position to teach a course at the university as a part time faculty member, an offer that he was thrilled to accept.

Ward continued to train with his Coach Eyestone after graduation and began to compete in marathons across the country.

The US Olympic trials were held in Los Angeles on 12 February 2016, Ward crossed the finish line in third place and earned a spot on the coveted Olympic team.

A mere six months later, Ward finished in sixth place in Rio de Janeiro with a time of 2:11:30. Meaning that he was less than three minutes behind gold medallist, Eliud Kipchoge, from Kenya.

Famously, the media referred to Ward as being the happiest sixth-place finisher they had ever witnessed at the Olympics.

In 2020, Ward ran at the U.S. Olympic trials for the 2020 Tokyo Olympics although he did not earn a place. He continues to train today in preparation for the 2024 Paris Olympics and still passionately teaching his statistics class at BYU.

While his current academic occupation is arguably not common for an competing Olympian, his knowledge and experience helps him to prepare for each race.

Armed with logistical thinking and insightful knowledge, these have had a positive impact on his approach to competing as an Olympian standard athlete.

In an interview with The Olympics, Ward stated: “I love the academic side and I love running. There is a lot going on, sometimes it feels like a balancing act but it feels like I’m blessed with a day full of things that I love.

“Now my two worlds, the athletic and the academic, has very much combined.

“It fuels the decisions that I make and how I train and race strategies. The numbers really play a big part into the running as well.”

Maths-Whizz is a super clever virtual maths tutor which delivers interactive games, lessons and exercises for five to 13 year olds.

To see how good it is at transforming home learning for parents, we’ve negotiated an exclusive 20% off price to make it £15.99 for the first month.

See if you like it first and sign up to a 7-day no-obligation free trial by clicking here. If you want to sign up for a month at a time or even a year, you can do that here but don’t forget to use the promo code ‘MATHS20’.

This article contains affiliate links, we may receive a commission on any sales we generate from it.Learn more

Ward spoke more about his fine-tuned analytical approach in an interview with Forbes, commenting:

“I would say I have a very analytical approach when it comes to racing.

“I believe it really lends itself to help me be more prepared for a race. I really look into the numbers when it comes to racing such as things like pacing profiles in regards to elite runners or everyday runners and everything in between.

“What is has specifically helped me with is looking at what differentiates the elite runners from the average runners and how they adjust their approach as they get further along in their careers.”

It’s true that Ward believed his background of scrutinising data gave him a push in the right direction to understand the common pitfalls that it’s statistically common for runners to face.

Ward continued: “Like in any sport, data can give you such a leg up in figuring out the best practices in your approach and optimal ways to succeed in your given competition.

“While it can’t get you over the hump by itself, I feel like my interest in data has helped me become a better runner and made me more prepared to run in some of the big races I’ve been able to compete in.”

Kids who code are better at problem solving and are more creative, study finds
It turns out a tape measure and a bit of maths is all you need to find Wally in seconds