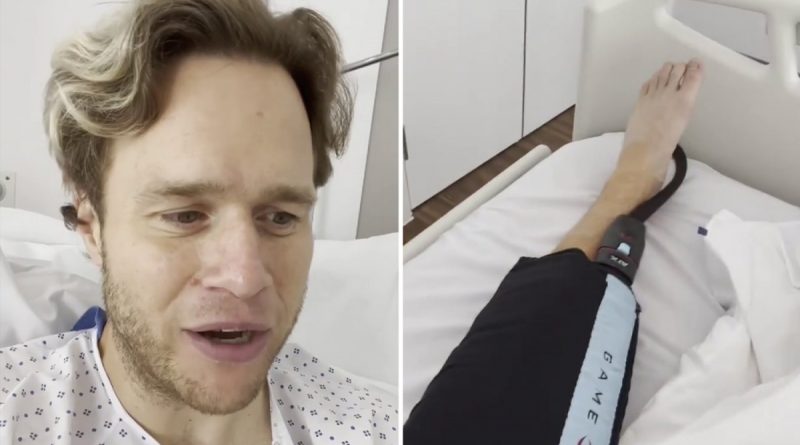 OLLY Murs has been taken to hospital after injuring his leg in a horrific onstage accident.

He explained that he had just had surgery after he jumped during a performance and a fragment of bone lodged itself in the back of his knee.

The star told fans: “I am so sorry I look like a bag of s*** this morning but I wanted to send you a message to let you know what is going on.”

Olly, 37, posted a video message on Instagram, smiling through the pain as he updated his alarmed fans.

He explained: “I’ve just had surgery on my left leg. For some of you who came to my Newmarket gig on Friday, thank you for your support.

“It has been a mad 72 hours since the gig getting to this point.

“Basically after my second song a fragment of bone  that was in my knee managed, after I jumped, to lodge itself on the back of my knee which basically shut my leg down.

“During the gig I was limping the whole time. I am in, I have had the surgery. I wanted to get it done because of the Newbury gig on the 14th and Singleton Park on the 15.

“I wanted to do this for you guys. It will be a different gig, I won’t be running around like I normally do.

“There might be a stool for me to sit on. But I cannot cancel these gigs for you guys. It was such an amazing vibe at Newmarket so I will give it everything next week.

“I honestly thought the once, I thought I had done my knee again. I thought I had ruptured my ACL [one of the ligaments that help stabilise your knee joint being honest.”