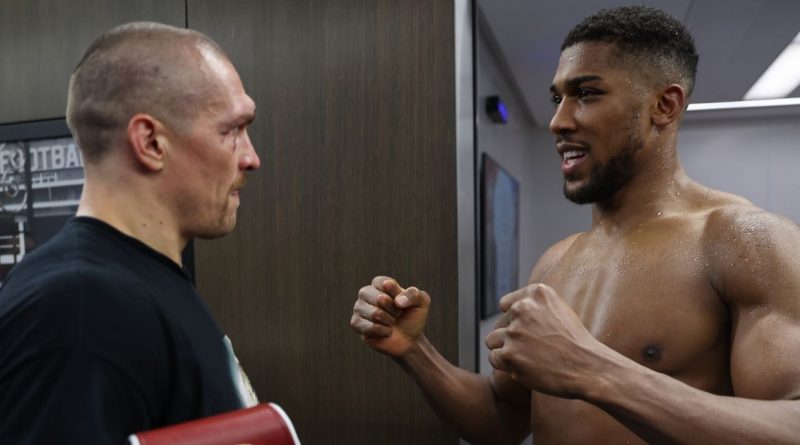 
Usyk won the WBA, WBO, IBF and IBO heavyweight titles against Joshua last night – but the Ukrainian handed the belts back to Joshua after the fight

Oleksandr Usyk handed the heavyweight titles back to Anthony Joshua after his win over the Brit last night.

‘AJ’ was pressured by Usyk from the bell, with the Ukrainian landing the better shots in the opening rounds.

A resurgence from Joshua midway through the fight would not be enough, as Usyk walked away with the WBA, WBO, IBF and IBO heavyweight belts.

And footage from the locker room after the fight showed Usyk – who will be sent new belts – give the titles he won from Joshua back to the Brit.

Joshua said of their interaction: “In the changing room I said to him I’ll see you again and I’m looking forward to it.”

Usyk is now undefeated in 19 professional fights, picking up his third win in the heavyweight division.

The former undisputed cruiserweight champion moved up in weight after defending his titles against Tony Bellew in 2018.

A lot was made of Usyk’s mind games during fight week, with the former Olympic gold medalist dressing as ‘The Joker’ at the pre-fight press conference earlier in the week.

But Usyk says the fight went exactly how he thought it would go.

He said: “This means a lot for me. The fight went the way I expected it to go.

“There were moments when Anthony pushed me hard but it was nothing special.”

“I had no objective to knock him out because my corner pushed me not to do that. In the beginning, I tried to hit him hard, but then I stuck to my job.”

And Matchroom Boxing promoter Eddie Hearn told Sky Sports he expects Joshua – who wants a rematch with Usyk – to be an underdog if the two fight again.

He said: “He will want to go back in that rematch, and he will be the underdog in that fight but he has just been beaten by a pound-for-pound great.

“Joshua lives and breathes boxing, he is already talking about training again and he will be in the gym and ready to get back in again.

What did you think of Usyk’s win over Joshua? Let us know in the comments section below

“You can criticise Anthony Joshua, but he has just fought a great and he is fighting the very best, and tonight he came off second best.

“There is a new unified heavyweight world champion, but there is no point sulking about it and he must go back to the drawing board and rebuild.

“We will have enough time, the fighter in AJ says he will win the rematch but I had it close before Usyk ran away with it at the end. But he has to make changes and impose his style to win the rematch, or he will lose again.”