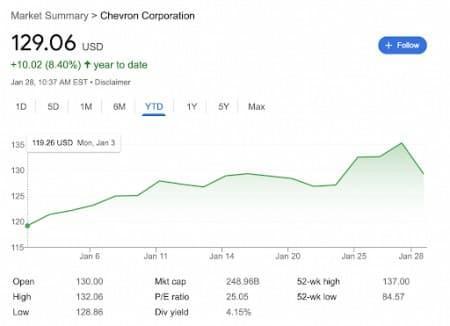 
It’s early innings in the current earnings season, with just 4% of S&P 500 companies having reported fourth-quarter 2021 earnings. According to FactSet data, 76% of those companies have reported actual EPS above estimates, while 90% have reported a positive revenue surprise. For Q4 2021, the blended earnings growth rate for the S&P 500 has clocked in at 21.8%, which could mark the fourth straight quarter with earnings growth above 20% if the earnings trajectory remains unchanged.

Hess and peer EOG Resources (NYSE: EOG) have broken with the industry trend of returning excess cash flows to shareholders. The two have come out and announced plans for massive capex spending in a bid to boost production, with Hess announcing a 2022 capex budget of $2.6b; good for a 37% jump with Bakken spending up 75% to $790m. In the Bakken, Hess plans to run 3 rigs to achieve its 168kb/d production target, an increase of ~14% from Q3 levels of 148kb/d.

The energy sector, in general, is expected to post another blowout quarter in large part due to an increase in oil and gas prices.

At the company level, Exxon Mobil (NYSE: XOM), Chevron, and ConocoPhillips (NYSE: COP) are expected to be the largest contributors to the year-over-year improvement in earnings for the sector. Combined, these three companies account for $16.7 billion of the projected

$28.6 billion year-over-year increase in earnings for the sector.

Here are Wall Street’s projections for the ‘Big 3’ in the U.S. oil and gas business.

Exxon Mobil Corporation (NYSE: XOM) is expected to report earnings on Feb.2 before the market opens. The report will be for the fiscal Quarter ending Dec 2021. According to Zacks Investment Research, based on eight analysts’ forecasts, the consensus EPS forecast for the quarter is $1.9, marking a big improvement from EPS of $0.03 reported for the same quarter last year. Exxon has exceeded earnings expectations in four straight quarters.

On Wednesday, Exxon Mobil declared an $0.88/share quarterly dividend, in line with the previous payout and good for a 4.75% forward yield.

Exxon Mobil plans to commence production at its second oil platform in Guyana next month, Reuters has reported.

The second floating production storage and offloading vessel, Liza Unity, reportedly will nearly triple production this year to 340K boe/day from 120K boe/day, incorporating oil and gas from the Fangtooth-1 and Lau Lau-1 wells, both made public earlier this month.

A third FPSO vessel, named Prosperity, is under construction and expected to deliver first oil in 2024, but the Exxon-led consortium hopes to deploy 7-10 platforms in Guyana.

Partner Hess Corp.(NYSE: HES) which reported Q4 earnings earlier today, has said it expects the Stabroek block to produce 1M bbl/day of oil and gas in Guyana by 2027.

Chevron Corporation (NYSE: CVX) reported earnings before market open on Friday. The consensus EPS estimate was $3.13, and the consensus revenue estimate was $45.22B (+79.1% Y/Y). While the initial reaction to Chevron’s earnings was that it had its best quarter since 2014, shares declined Friday because some expectations were not met.

Earnings showed $2.56 per share against analyst expectations of $3.12 per share. But revenue topped expectations at $48.13 billion, against analyst consensus of $45.69 billion. So, a mixed bag. Full-year results saw Chevron with $21.1 billion in free cash flow, and a $12.9-billion reduction in debt. For the year, Chevron earned $15.6 billion, compared to 2020’s recorded $5.5-billion loss.

It’s also moved to hike its quarterly dividend by 8 cents (6%) to $1.42/share, increasing its payout to shareholders.

Chevron was the biggest spender at a November federal auction of oil leases in the U.S. Gulf of Mexico, spending $47M. The auction saw more than 300 drilling blocks spanning 1.7M acres of federal waters leased.

After tightening its purse strings in 2020, Chevron has announced a $15B capex budget for FY22, up 20% from 2021 but at the low end of its $15B-$17B guidance. This includes $8B to be spent on the company’s upstream business, towards currently producing assets and development at its Permian Basin.

As of Friday, CVX shares have gained 8.4% in the year-to-date.

Houston, Texas-based ConocoPhillips (NYSE: COP) is expected to report earnings on Feb. 3 before the market opens. The report will be for the fiscal Quarter ending Dec 2021.

According to Zacks Investment Research, based on eight analysts’ forecasts, the consensus EPS forecast for the quarter is $2.2. The reported EPS for the same quarter last year was $-0.19. ConocoPhillips has beat earnings expectations in four straight quarters.

On Jan. 18, Goldman Sachs raised ConocoPhillips to buy from hold, with analyst Neil Mehta predicting shares will trade at $101 in the coming 12 months, good for a 12.6% upside.

Mehta says the accretion from ConocoPhillips’ Permian assets will help the company deliver a 7.5% shareholder return in 2022.

By Alex Kimani for Oilprice.com

Read this article on OilPrice.com