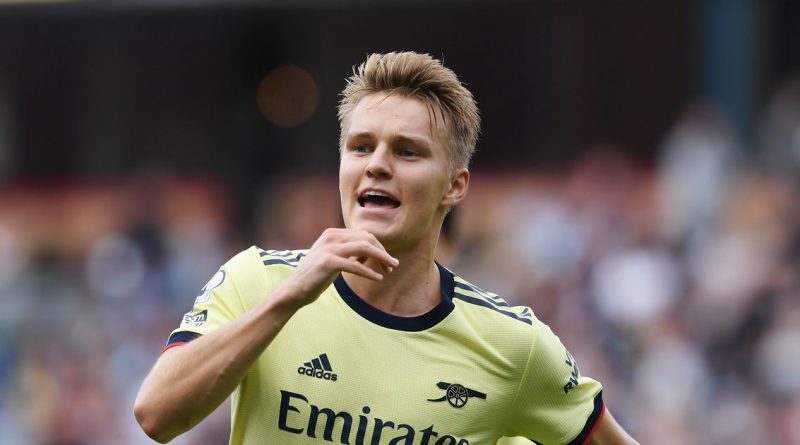 
Mikel Arteta’s side will contest the north London with Tottenham on Sunday, and the Arsenal boss will be hoping his Norwegian midfielder can provide some more magic this weekend

Mikel Arteta didn’t hold back in the transfer market this summer, with his Arsenal side ending the window as the biggest spenders having shelled out £145million.

Nuno Tavares was the first through the door, before the likes of Albert Sambi Lokonga and Ben White arrived soon after.

The Gunners then continued their summer spree by adding Martin Odegaard, Aaron Ramsdale and Takehiro Tomiyasu to their squad.

Of those six signings – all of whom are aged 23 or under – Martin Odegaard is proving to be the best of the lot so far, after having shown what he is capable of in the recent 3-0 win against Burnley.

Odegaard was considered one of the brightest prospects in world football when he burst onto the scene at Stromsgodset aged 15, but limited first-team opportunities at Real Madrid, and a series of loan spells have limited his development as a player.

But that’s all behind him now, and the Norwegian has a point to prove at Arsenal.

If he does, then it’ll be further proof that it was the right decision to shell out the £30million required to sign the 22-year-old from Real Madrid.

And the Arsenal boss heaped praise on the midfielder following his impressive performance last weekend.

Will Martin Odegaard be a success at Arsenal? Comment below.

“I think we are building some leadership in the group,” Arteta said. “It’s a really young group, with a lot of players under 23.

“Martin has this capacity to do that with his talent, taking the ball in moments where others probably refuse to, but as well with his attitude, his rhythm and the way he presses and puts people under pressure.”

Arteta also had plenty of positive words to say about the Norwegian’s defensive duties during the recent win after the Norwegian proved there is more to his game than his attacking threat.

Mikel Arteta’s side have now won three in a row

“[Odegaard] is probably the first to do it [those defensive responsibilities],” said Arteta. “I was really impressed with Auba as well – I think his rhythm and high pressing was fantastic.

“It was a real commitment and purpose because you can go to try and win the ball or put pressure [on] – but you can tell when you are really doing it or when you’ve been told to do it.

“There was a big meaning behind it and when you go to places like that, when you are having difficult moments and you want to start to get results, I think you have to go to those basics and have every single player do that, even the ones that came on – I think they were superb, lifted the momentum of the team and took us to a different level. I think that’s really important.”