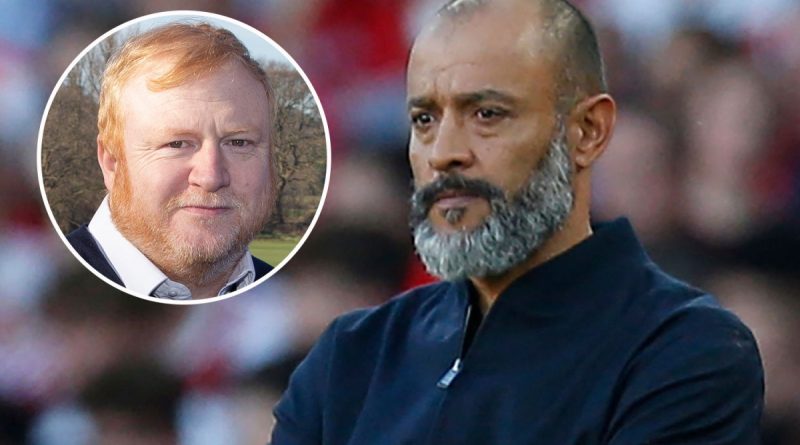 But just 89 days later his position is already under threat.

The Portuguese boss is fighting to keep his job after Spurs’ 3-1 defeat at Arsenal in Sunday’s North London derby.

Having started the Premier League season with three successive 1-0 wins, Nuno’s men suffered their third straight heavy defeat after going 3-0 down against the Gunners in the opening 34 minutes.

And as damning as the performance on the pitch were the manager’s post-match comments.

Nuno slammed his Tottenham players as he accused them of being unable to follow orders.

But potentially even more damaging for his own career prospects was his startling admission he was also to blame because he made ‘bad decisions’, hinting he got his tactics and team selection disastrously wrong.

Social media and radio phone-ins were awash with calls for Nuno to go.

But while it is difficult to make a case for him to remain, you cannot say he is totally responsible for the mess Tottenham currently find themselves in.

But Nuno, with nine points, has actually amassed one more point than Poch did from his opening six top flight matches.

That is not all that is similar to the Argie reign as NINE of Spurs’ starting line-up at the Emirates played under Poch, who was sacked nearly two years ago.

That shows a shocking lack of investment in the squad from chairman Daniel Levy and co upstairs and it has shown.

Tottenham have looked stale since long before Nuno arrived and familiarity has certainly bred contempt in and around N17.

They are still paying for not refreshing their squad when Pochettino was at the height of their powers in 2018-19 when they became the first club in Prem history not to sign or sell a player in a season.

Too many players have been at Tottenham for too long – and you can include Harry Kane among those after his latest no-show at the Emirates.

Last year’s Golden Boot winner is still yet to get off the mark in the League this term following his failure to force through a move to Manchester City in the window.

You can never tell for certain but it certainly looks like the England captain has been affected by a summer of speculation he sparked himself.

Levy refused to sell Kane – who has three years left on his deal – for less than £160million.

With hindsight, the chairman might have been better off selling and reinvesting the money in new signings to freshen up the squad.

But there is no way anybody is going to stump up that much for the striker now.

And Kane is not the only star at Spurs who possibly needs to be moved on.

Dele Alli is another who needs a fresh start for all concerned after he was dragged at half-time against the Gunners.

The same could be said for Eric Dier and maybe a few others.

Ironically, Tottenham’s best player at Arsenal was keeper and captain Hugo Lloris, who looks to be heading out the door as his contract expires at the end of the season.

Spurs’ new recruitment guru Fabio Paratici was appointed in the summer and he and Levy arguably have a bigger job on their hands turning the club around than Nuno.

The former Wolves boss was never the first choice to be appointed as Jose Mourinho’s permanent successor.

And having only been handed a two-year contract – hardly a ringing endorsement – Nuno was never expected to be at White Hart Lane for the long term.

But neither did anybody believe he would be feeling the heat so soon.

Arsenal fans ask ‘did we win League?’ as they light flares and party outside Emirates after derby day win over Tottenham