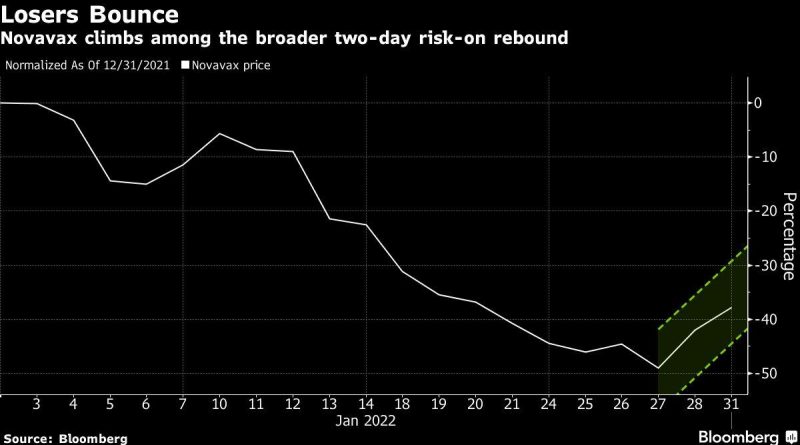 
(Bloomberg) — Novavax Inc. and Beyond Meat Inc. jumped alongside other growth-oriented stocks in Monday trading after an Evercore ISI strategist suggested some of the battered meme stocks could rebound in coming weeks.

The biotechnology company — which just filed its Covid-19 vaccine for emergency use in the U.S., as expected — climbed 13% after trading at an 19-month low last week. Beyond Meat jumped 15% after testing an intraday nadir on Friday.

The stocks were among the former retail trading favorites named by Evercore ISI’s Julian Emanuel as those that had fallen more than 50% from their peak and with at least 10% of the float shorted that could stage a turnaround.

“Such stocks could be positioned to do a 180-degree turn should ‘cooler heads prevail’ in the weeks ahead,” Emanuel wrote in a note to clients. Other stocks in his list were also moving higher in Monday’s risk-on rebound, including Peloton Interactive Inc., Stitch Fix Inc., Oak Street Health Inc. and Eventbrite Inc., as well as some of Cathie Wood’s Ark Investment Management fund favorites: Teladoc Health Inc., Twist Bioscience Corp. and Editas Medicine Inc.