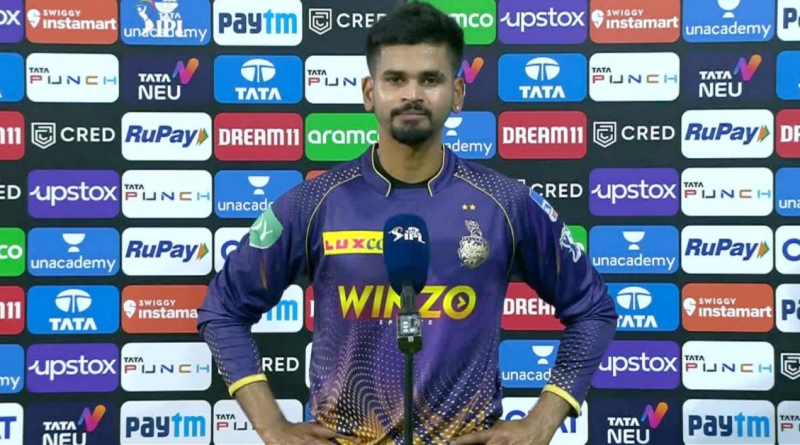 Batting first, Lucknow Super Giants batted exceptionally well against the strong Kolkata Knight Riders bowling unit. Quinton de Kock smashed a century and captain KL Rahul smashed a half-century to help LSG score 210/0. This was the highest ever opening stand in the history of the IPL and this was the first time a team had batted the entire 20 overs in IPL without losing a wicket.

During the post-match presentation ceremony, Shreyas Iyer said that he is not sad at all because the match between KKR and LSG was one of the best games of cricket he has been part of. He said:

“I am not feeling sad at all. That was one of the best games of cricket I have played. The way we should our character and attitude was simply outstanding.”

“I love the way Rinku got us till the end but unfortunately couldn’t time it when two balls were remaining, he was really sad. I was hoping he could finish the game for us and could have been the hero, but still played a fantastic knock and I am really happy for him.”

The Kolkata Knight Riders captain further said that the Lucknow Super Giants batters played good innings and got a par total. He said that the mindset of KKR was to chase the target even after losing wickets in the powerplay. He asserted:

“When we came in, I never thought it would play this way because it was dry and the grass wasn’t that wet. I thought there would be little help for the spinners but once they started going.”

“LSG took on the bowlers and got a par total. It was a do or die situation for us, even after losing two wickets in the powerplay our mindset was to go for the chase and take it close as possible and put them under pressure.”

Shreyas Iyer said that the season of Kolkata Knight Riders has been a volatile one as they started off very well but then faced back-to-back defeats. He asserted:

“It was a volatile season for us, we started great but lost five games in a row and I personally feel we did a lot of chopping and changing, we had to do that because of the niggles and form, but we also got to know the players like Rinku. The vibe has always been positive in the dressing room and we never hit the panic button.”

He further talked about his relationship with head coach Brendon McCullum, who will no longer remain as the head coach of KKR as he has been appointed as England’s Test coach. Iyer stated:

“I have built a really good relationship with Baz (McCullum) and he is someone who is calm and composed when the situation is going out of the way, you can go and talk to him at any point of the game. He’s got that aura when he walks around the players and never judges the players, all of us are equal for him.”