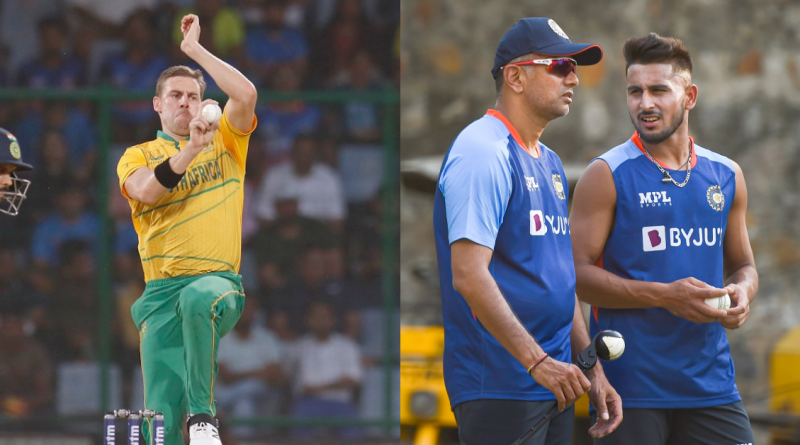 Express pacer Anrich Nortje is considered one of the fastest bowlers in the world as he possesses the ability to bowl the deliveries consistently at over 150kmph.

Speaking at a press conference on Thursday, Anrich Nortje opened up on his comparisons with Umran Malik. He said that he is not bothered about who is the fastest pacer and even though he trains to get faster he doesn’t think about it on the field.

“Yeah, at this stage, I am not bothered about who is the fastest (bowler). Not really bothered about it who is the fastest and what the speed gun is, it is about contributing for the team. When I do train, when I am not playing, you obviously think about how can you get fast with the way you train, whatever you are doing. In the back of my mind, it would be something I will keep on striving towards but it is not something I think about when I go to the field,” said Nortje during a press conference on Thursday.

Nortje further lauded Umran and said that they are not competing to bowl the fastest ball.

“Umran Malik very good bowler, very fast bowler. He has shown what he can do. If he gets faster, great for him. If I get faster, great for me. I do not think we are at the stage where we are competing to bowl the fastest ball, it is about winning games and trying to contribute,” he added.

The Proteas pacer Anrich Nortje, who missed a lot of cricket after suffering an injury last year, further said that he is not yet 100 per cent but he is working on it to reach there.

“No. Not yet. Still working on it, still trying to find out one or two things. And body-wise, just getting there. It is about slowly increasing and slowly building it up. Not 100 per cent there where I want to be. I probably rate myself from where I was last year, end of IPL, the start of World Cup so still trying to get there,” said Nortje.

“It is hard because some of the stuff is limited, some of the bowling is limited. You cannot always go out there and bowl 8-9 overs a day, so it is very limited. But so far, it has been a good challenge, it is something that will help me in the future. If there are any niggles or injuries going forward, some important things to take out from this,” he added.

Anrich Nortje, while talking about South Africa’s bench strength, said that everyone has been in good form. He added that several players, who are not getting an opportunity in the playing XI, are performing better than the players who are playing, at some stage.

“I think everyone has been in good sort of form, everyone has been either playing in the IPL or training quite hard back home. It is nice to see that the guys who are on the bench are really almost performing better than the guys on the pitch at some stage.