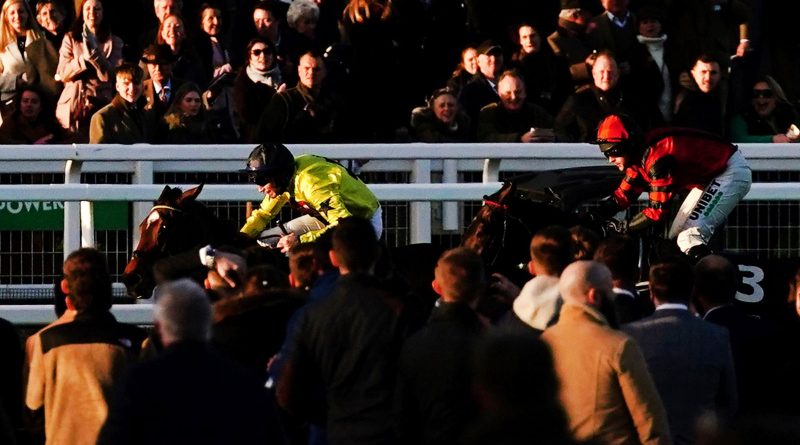 North Lodge is unbeaten in two runs after triumphing in a dramatic renewal of the Grade Two Ballymore Novices’ Hurdle at Cheltenham.

The race was incident-strewn from the off, with hurdles missed out due to the low sun and Harpers Brook coming down early on and hampering Henry Daly’s 4-5 favourite Hillcrest, who jinked and unseated Richard Patrick.

Joined by Nicky Henderson’s Balco Coastal up the hill, the Alan King-trained North Lodge then drifted across the track on the run to the line, slightly impeding the Seven Barrows runner, who was eventually beaten by two and a half lengths.

After a stewards’ inquiry the placings remained unaltered and King’s 7-1 chance added a Cheltenham success to his prior hurdle win at Aintree in early December.

King said: “I hoped he’d run very well, but I thought whatever he did he’d improve again.

“Ideally I’d have liked to have gone a slightly lower route with him, but we had a little chat midweek and decided we’d be brave and come and have a look and see.

“I always felt a step up in trip would suit. Aintree, over two miles, I thought would be sharp enough.

“I think he’s fairly adaptable ground-wise. I had his full-brother years ago, Winter Escape, who was smart as a young horse.

“I thought he jumped well. The hurdles being taken out was actually a hindrance as he got a bit green going round them. It probably confused him a little bit.

“I don’t know about the Festival. I just said to the boys (owners) let’s enjoy today and chat about it next week.

“I think potentially he’s a very good horse and we’ve just got to do it right. Whether he wants to come to Cheltenham this year, I’m not sure.”