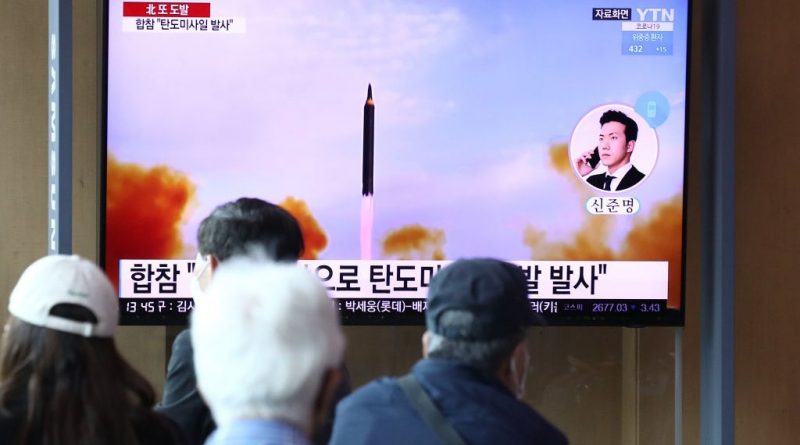 
Not long after North Korea launched its fifth weapons test in 10 days Tuesday, firing a ballistic-missile high above northern Japan, a familiar routine began to unfold. Leaders from the U.S., South Korea and Japan issued strongly worded statements condemning the “dangerous” and “destabilizing” provocation. American and South Korean militaries conducted “show of force” exercises, sending fighter jets to bomb a deserted island in the Yellow Sea, later lobbing several missiles of their own into the vast Sea of Japan. On Wednesday, the U.S. aircraft carrier USS Ronald Reagan was moved off the east coast of the Korean peninsula. Within hours Pyongyang launched another missile into the Sea of Japan and then, on Thursday, flew 12 fighter jets and bombers near its border with South Korea, triggering the South to scramble 30 warplanes in response.

For more than 30 years, the U.S. and its Asian allies have responded to North Korean demonstrations of ever-advancing weapons technology with their own shows of force. But the escalation spiral of the last few days is the latest indication that coercive tactics by the U.S. and its allies are failing to compel North Korea to curtail its missile and nuclear programs. With signs that the North may soon perform its seventh underground nuclear test, the now-routine countermoves to Pyongyang’s provocations, embraced by Republican and Democratic presidents alike over the decades, look more the motor-reflex response than a strategy to prevent the unacknowledged truth: that North Korea is a full-blown nuclear power.

Estimates vary, but analysts say North Korea has produced enough fissile material for between 20 to 60 warheads to go along with an arsenal of several hundred short- and medium-range ballistic-missiles capable of hitting South Korea, Japan, and U.S. military bases and territories in the region. Pyongyang has also demonstrated long-range missiles that could theoretically reach every major city in the continental United States.

As the nation’s nuclear capabilities have grown, multilateral diplomatic efforts to rein it in have ground to a halt. President Joe Biden’s team has made multiple public overtures to meet North Korean officials without preconditions, but Pyongyang has thus far ignored them. By waiting for Pyongyang to decide whether to engage, the White House is effectively endorsing the status quo. It appears that North Korea’s unchecked nuclear weapons expansion has become at most a distraction for an Administration that’s mired in Russia’s land war in Ukraine and China’s military threats on Taiwan. “North Korean leaders know that President Biden is sensitive to the potential criticism that the U.S. policy is failing on the Korean Peninsula, and so it’s the right time for North Korea to start putting pressure on the U.S.,” says Narushige Michishita, a former Japanese Defense Ministry official who teaches at the National Graduate Institute for Policy Studies in Tokyo.

Read More: A Korean War Veteran’s Remains Were Lost for 70 Years. Here’s What Brought Him Home

Ultimately, experts inside and outside the government say, North Korean leader Kim Jong Un hopes he’ll be able to use his growing nuclear war chest as leverage to keep his dynastic grip on power and lift economy-crippling sanctions from his isolated country. What’s needed, some analysts say, is a diplomatic road map that would show North Korea how they might get what they want, in exchange for freezing their programs and granting international inspectors access to them.

Kim has launched more missiles this year, 41, than any since he took power in 2011. Already armed with city-busting hydrogen bombs, his government is now developing smaller yield “tactical” nuclear warheads that are designed to fit on short-range missiles for regional targets, according to U.S. intelligence estimates. Emboldened by its technological progress, North Korea passed a law last month declaring its nuclear status as “irreversible” and forbidding any talks aimed at disarming them. Biden’s stated approach toward Pyongyang remains nonetheless focused on complete “denuclearization.”

Dismantling North Korea’s sprawling missile and nuclear weapon infrastructure would not only likely take a years-long diplomatic effort, the logistics are equally as daunting. Successive American presidential administrations have sought a deal to disarm North Korea with little to show for it—even before its first nuclear test in 2006.

The U.S. and North Korea’s diplomatic relationship is defined by a boom-bust cycle of crisis and rapprochement. Now Kim appears to be replaying his strategy wielded in 2017 when he launched dozens of missiles and detonated an underground nuclear bomb. The tense period brought Washington and Pyongyang to the brink of war with then-President Donald Trump threatening to unleash “fire and fury” on the peninsula.

The U.S. and North Korea engaged in a détente of sorts in 2018 when Trump accepted a proposal to meet Kim face to face. The President took trips to Singapore, Hanoi, and even a presidential walk across the demilitarized zone into North Korea. Yet even as Kim held back from missile tests in 2018 and 2019 and launched just a handful in 2020 and 2021, he did not abandon his weapons programs.

North Korea’s renewed rounds of missile launches this year have prompted widespread alarm in Japan, because many land in the Sea of Japan, also known as the East Sea, where fishing and shipping lanes separate the two countries. The missile launches violate long-standing UN Security Council resolutions, but it has now become nearly impossible for the U.S. to enact new sanctions on Pyongyang because it needs Russia and China to sign on.

In Tuesday’s test, a ballistic missile flew an estimated 2,850 miles, marking the longest distance a North Korean weapon ever traveled, soaring above the northernmost prefecture in mainland Japan before plunging into the Pacific Ocean. North Korea hadn’t launched a missile over Japan in five years.

At around 7:23 a.m. local time, cellphones and public speakers lit up with take-cover alerts through Japan’s early-warning systems, known as Emergency Network and J-Alert. South Korea’s Joint Chiefs of Staff said it detected and tracked the launch just outside Pyongyang, flying east for 22 minutes and reaching an apogee of 602 miles––or more than twice the altitude of the International Space Station.

The range suggested the missile was the Hwasong-12 intermediate-range missile, which North Korea unveiled in 2017 to threaten U.S. military bases in the region, namely the air base on Guam, a U.S. territory about 2,000 miles to the south with more than 100,000 American citizens. Initial assessments by the U.S. military indicated that it did not pose a threat to North America nor to Guam.

The test came just days after Vice President Kamala Harris’s visit last week to the region and anti-submarine drills between Washington, Seoul and Tokyo. The Administration has worked to build stronger ties between the three nations to confront North Korea, which has resulted in increased collaboration and an ongoing build-up of a ground- and sea-based radar network with defensive missiles.

The U.S. and South Korea recently reconvened the so-called Extended Deterrence Strategy and Consultation Group, which aims to draw up plans to guard against North Korea’s nuclear threats. Such bilateral planning, like the joint live-fire military exercises, has drawn further condemnation from North Korea.

Now, the world awaits for yet another nuclear test at Punggye-ri underground facilities, where U.S. surveillance satellites have detected preparation activities. “If they do such a test, from our perspective, that would clearly constitute a grave escalatory action that seriously threatens regional and international security instability,” Defense Department spokesman Brigadier General Pat Ryder told reporters at the Pentagon. “We’re calling on (North Korea) to cease these types of destabilizing and unlawful actions.”

Although the U.S. did not detail the penalties it would enact for another conducting nuclear test, long-time Korea watchers don’t expect to be surprised by the measures when they’re announced.