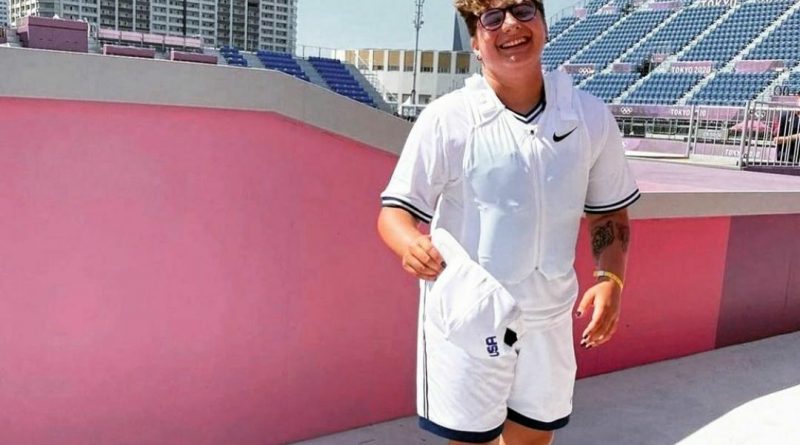 Alana Smith posted a heartfelt message on Instagram, days after they were the first openly non-binary athlete to compete for the US at the Olympic games. (Instagram/AlanaSmithSkate)

Non-binary skateboarder Alana Smith has written a moving message about representation after making history as the first openly non-binary athlete to compete for the US at the Olympics.

“For the first time in my entire life, I’m proud of the person I’ve worked to become,” Smith wrote on Instagram on 27 July.

“I chose my happiness over medaling,” they continued. “Out of everything I’ve done, I wanted to walk out of this knowing I UNAPOLOGETICALLY was myself and was genuinely smiling. The feeling in my heart says I did that.”

Smith added: “Last night I had a moment on the balcony, I’m not religious or have anyone/anything I talk to. Last night I thanked whoever it was out there that gave me the chance to not leave this world the night I laid in the middle of the road.

“I feel happy to be alive and feel like I’m meant to be here for possibly the first time in a extremely long time. On or off day, I walked out of this happy and alive… Thats all I have ever asked for.”

Alana Smith competed in the women’s skateboarding street event on Sunday (25 July) with their pronouns etched onto their skateboard, but the landmark moment was marred by sports commentators misgendering them throughout – much to the disappointment of LGBT+ fans.

“No one should have to be misgendered on an international stage like this,” Britni wrote. “Sports doesn’t know what to do with non-binary athletes.

“Shoutout to Alana Smith, the first openly non-binary athlete to represent the US in an Olympic Games.”

Smith’s profile on the Olympics website notes: “They are non-binary and use the pronouns ‘they/them’”, and uses the correct pronouns for them throughout their profile. However, at the top of that page, Smith’s gender is listed as “female”.