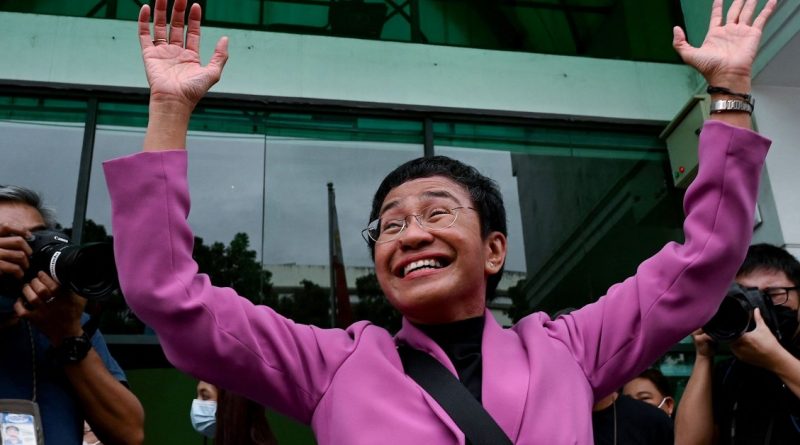 
A Philippine court on Wednesday acquitted journalist and Nobel laureate Maria Ressa as well as Rappler Holdings Corporation, the company that owns the news site she co-founded in 2012, of tax evasion charges. The ruling represents Ressa’s latest victory against what press freedom advocates have branded as judicial harassment.

The four tax evasion charges were filed in 2018 by the government of then-President Rodrigo Duterte, Rappler reported. An official from the clerk’s office of the Court of Tax Appeals, First Division, confirmed Ressa’s acquittal of tax evasion cases to TIME.

Ressa, who has been the president and CEO of Rappler since its founding and recently published a book titled How to Stand Up to a Dictator, claims she has been unfairly targeted following the news organization’s reporting of Duterte’s deadly campaign against illegal drugs. Rappler also produces investigative coverage of disinformation online and is one of Meta’s third-party fact-checking partners in the country.

Ressa, 59, and Russian journalist Dmitry Muratov were the 2021 Nobel Peace Prize awardees for their work in journalism amid “increasingly adverse conditions.” In 2018, she was among the “Guardians” of press freedom whom TIME collectively named as “Person of the Year.”

Read More: ‘It Is a Battle for Facts.’ What Nobel Peace Prize Winner Maria Ressa Understands About Why She Was Chosen

Duterte, a populist and widely popular president, had openly criticized Rappler for its critical coverage of his “war on drugs.” He alleged that it violated foreign ownership laws—which the company denies. In 2018, the Philippines’ Securities and Exchange Commission ordered Rappler to shut down after revoking its operating license, but the news website carried on doing business as usual.

The SEC case was then followed by a string of legal battles. In 2020, a court convicted Ressa of libel and sentenced her to almost seven years in prison. She is out on bail pending her appeal.

Her acquittal at the tax court on Wednesday leaves only three active legal battles, according to Rappler, including the libel conviction appeal, the SEC case, and a separate tax case.

The Hold the Line Coalition—an international group that advocates for press freedom—said in a statement on Wednesday: “We hope we are seeing the beginning of an end to the previous administration’s strategy to instrumentalize the courts as a means to undermine independent news organizations and damage journalists’ credibility. As an immediate next step, we call for all remaining cases against Rappler and Ressa to be closed and their constant persecution to be stopped once and for all.” The group called on the incumbent administration of President Ferdinand Marcos Jr. “to hit reset on his predecessors’ vast campaign of media repression.”

Reporters Without Borders’ Press Freedom Index ranks the Philippines, a Southeast Asian nation of 110 million, 147th among 180 in the world, noting that at least 34 journalists have been killed there between 2012 and 2021. As recently as Oct. 3, 2022, a veteran journalist reporting on rampant corruption was shot dead while driving on his way home.