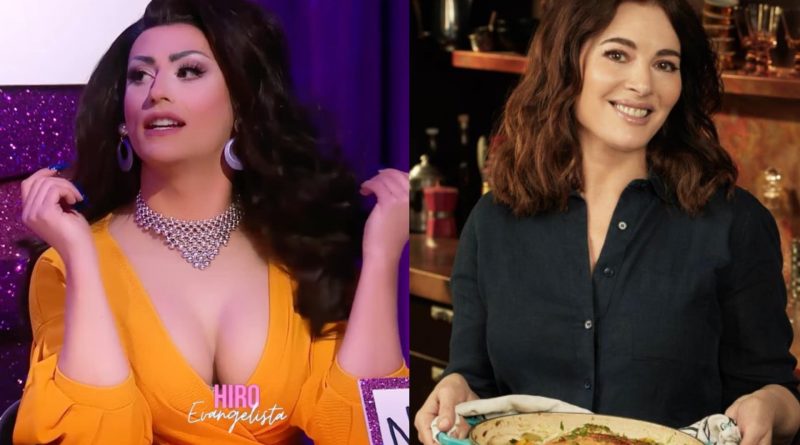 Drag Race UK star Ella Vaday won plaudits from fans for her instantly iconic impression of Nigella Lawson on Snatch Game – and the celebrity cook herself is also a fan.

Vaday wowed Drag Race UK viewers with her hilarious, pitch perfect impression of Lawson on Thursday’s episode (28 October). She even managed to reference the famous cook’s now legendary (and intentional) mispronunciation of “microwave”.

Twitter went into meltdown after the episode aired, with many heaping praise on Vaday – but many others rushed to ask Lawson herself if she had seen the incredible moment.

Lawson initially told fans that she was on a train when the episode landed, meaning she wasn’t able to watch it alongside everyone else. However, she was quick to catch up once she heard that Vaday had impersonated her on Snatch Game.

The Cook, Eat, Repeat writer admitted that she was “nervous” before watching it back, but her nerves were firmly put to bed when she saw Vaday’s hilarious impression.

Proving that she’s always in on the joke, Lawson has heaped praise on Vaday on Twitter, saying she was “charmed” and “honoured” to have the drag queen impersonate her on Snatch Game.

One Twitter user tweeted Lawson to say they were “dying” to hear what she thought of Vaday’s impression.

“Nigella strikes me as someone who doesn’t take herself too seriously, so I hop she finds it hilarious,” the Twitter user wrote.

In a series of tweets, Lawson praised Vaday as “divine”, adding that she has “nothing but admiration” for the trailblazing drag queen.

She acknowledged that it’s usually “slightly disconcerting” to see people impersonating her, but added that she was “excited” by the prospect of watching Vaday’s version of her.

Lawson and Vaday even appeared to hit it off on Twitter, with the cook reaching out to the fan favourite queen to show her appreciation.

Naturally, it wasn’t long before fans begged BBC producers to bring Nigella on as a guest judge for season four of Drag Race UK – but Nigella doesn’t seem so sure. She thinks she could be a “disappointment” after Vaday’s incredible impression.

We’re pretty sure most Drag Race UK fans would be overjoyed to see Nigella teaming up with RuPaul and Michelle Visage on a future episode.

Nigella is widely loved within the LGBT+ community and is widely recognised as a gay icon for her extremely camp television series and books.

Lawson once famously said that all women should fall in love with someone of the same sex. Moreover, she once said she is a “gay man in a woman’s body” in 2016, a remark made by her late husband, John Diamond, for her affinity with the queer community.

She has also shown her ally credentials time and time again with her tireless support for the trans community.