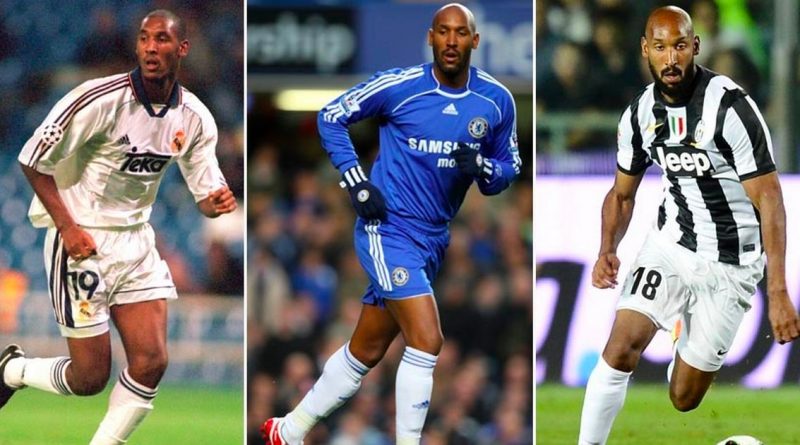 One of the most controversial figures in modern French football, Nicolas Anelka was never particularly bothered about burning bridges when it came to a club career that spanned just shy of two decades

Paul Merson says Nicholas Anelka could have been better than Ronaldo

Most would assume that if a player has a CV that boasts the likes of Paris Saint-Germain, Arsenal, Real Madrid and Chelsea, the star in question would go down as one of the best footballers of the last half a century at the very least.

Stints at super clubs in four of Europe’s five major leagues, some would argue Nicolas Anelka’s temperament and ego were his demise, others claim without it, he wouldn’t have achieved half as much.

Dubbed ‘Le Sulk’ for a career plagued with tantrums at every turn, Anelka raised eyebrows with his attitude right from the very beginning.

While his exploits for France’s national team are well documented, his expulsion from the 2010 World Cup a particular low point, on the anniversary of his move to Real Madrid, Mirror Sport analyses some of the most controversial moments of a 19-year club career.

Having caught the attention of a number of potential suitors during his stint at the world-renowned Clairefontaine academy, Anelka signed for French giants Paris Saint-Germain as a youth player in 1996.

Just 10 appearances later, however, and he was off – headhunted by a man who seemingly knew every youth prospect in France at the time in Arsene Wenger to up sticks to Arsenal.

Moving to North London caused quite the stir back in France, the Gunners criticised for paying a meagre £500,000 for the forward, though Wenger was aiming to try and refrain from paying a single penny under the precedent of the recent Bosman ruling.

A long-term injury to Ian Wright in the 1997-98 season opened the door for Anekla to cement his status as a first-team regular, an opportunity he took in emphatic fashion.

A debut goal against Manchester United was always going to endear him to the Highbury faithful, before finishing the following campaign as top-scorer cemented his status as a fan favourite – until the transfer speculation begun.

His performances had caught the eye of Real Madrid, with Anelka confirming his desire to leave Arsenal shortly after.

The move to Madrid

On August 2 1999, Anelka’s move to Los Blancos was sealed, though he later conceded he regrets his decision to leave the Gunners, a club he claimed to have a “great love” for.

Purchased for £22m in the summer of 1999, Anelka’s time in Madrid was blighted by media ridicule, stemming from the fact he took five months to bag his first goal for the club.

It would reach February of the following year before Anelka would notch his first league goal, though he picked his timing to perfection with an effort against fierce rivals Barcelona.

In trademark Anelka fashion, it was a case of one step forward two steps back as he was suspended from training just a month later due to a disagreement with manager Vincent Del Bosque.

His heroics in the Champions League semi-final for Los Blancos were not enough to repair the damage done and Anelka was sold after just one season at the Santiago Bernabeu to former side Paris Saint-Germain.

Where did Anelka play his best football? Have your say here.

It is easy to forget much of Anelka’s career, purely through the fact just so much happened, but sandwiched in between a loan spell at Liverpool and a move to Turkish Super Lig outfit Fenerbahce was a two and a half year spell at Manchester City.

The £13m paid for him by manager Kevin Keegan would prove to be money well spent, even if it was a club-record transfer, with the Frenchman finishing both of his two full seasons at the club as his sides top scorer.

Taking to life at Maine Road with ease, Anelka bagged 14 goals in his debut campaign, including a strike in the last ever derby at the ground before the move to the City of Manchester Stadium, now know as the Etihad.

A season later, the first in the new ground, Anelka was on hand to deliver the hammer blow in Jose Mourinho’s first ever defeat as Chelsea boss.

A return to London

Following a bizarre season and a half stint at Bolton Wanderers, quite the culture change from his Real Madrid days, Anelka restored the glamour with a move to Chelsea in January of 2008.

Burning the last few bridges he had with Arsenal fans, Anelka flourished with the Blues, scoring at a rate that had not been present at his previous few clubs, he even secured the Golden Boot award in November 2008 to mark the fact he was the first player to reach ten goals that season.


Six months later saw Anelka get a frosty reception at the Emirates as he returned to North London in Chelsea colours, opening the scoring in a 4-1 win for the Blues, though he opted against celebrating as he claimed he “still loved Arsenal.”

His four years in West London would go on to be the most illustrious spell on his career in terms of team accolades, winning the Premier League for the second time in his career alongside two FA Cups.

Anelka during a rare outing for Juventus
(

The striker was never going to leave Serie A off his list of leagues to conquer, joining Italian giants Juventus on a five-month loan deal from Shangahi Shenua (another of his less conventional moves).

Having made his debut for the ‘Old Lady’ against Celtic in the Champions League, Anelka would only turn out in the famous black and white strip another two times – yet still somehow earned a Serie A league winners medal.

Arsenal fans would have been stunned to see Anelka line up alongside fellow Gunners rebel Nicklas Bendtner in Turin, albeit for a very brief period of time.

His stint at the Hawthorns, Anelka’s sixth Premier League move, was more remembered for a controversial goal celebration than any of his technical prowess.

Following his first Baggies goal, which came more than four months into his stint there, he he performed a quenelle, a hand gesture made popular by his comedian friend Dieudonné, described by some critics as an inverted Nazi salute.

The gesture prompted an investigation from the FA over allegations of anti-Semitism, eventually concluding in a five-game ban and a £80,000 fine.

Never one to do things the ‘normal’ way, Anelka announced his departure from West Brom on social media, before he had informed the club hierarchy himself.

West Brom had made it known Anelka had not told them and issued him with 14 days notice of termination from the club for gross misconduct, a sad but fitting end for a talent hindered by temperament.