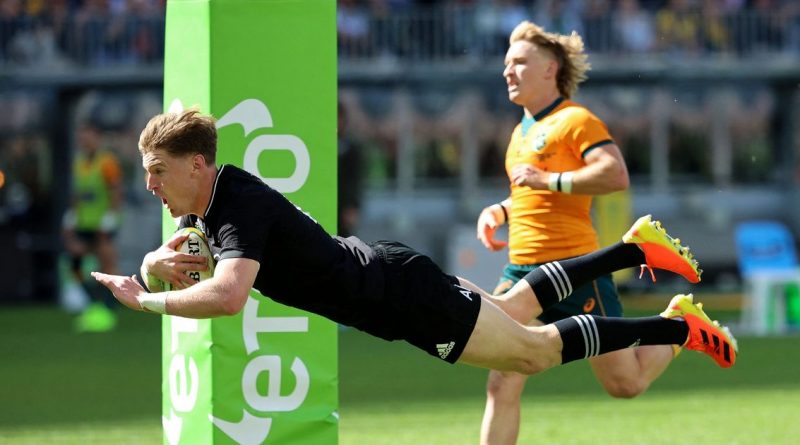 New Zealand returned to the summit of the Rugby Championship standings on Sunday after they beat Australia 38-21 to complete a Bledisloe Cup clean sweep in Perth.

David Havili scored twice for Ian Foster’s men as the All Blacks emerged with the bonus-point win despite Jordie Barrett’s controversial dismissal in the first half.

The full-back scored the opening try at Optus Stadium and was slightly unfortunate in his return to the team, but New Zealand nonetheless stormed to a decisive victory.

Samu Kerevi was one of the few changes made by Wallabies coach Dave Rennie for the third Bledisloe Test, returning to the centre for his first Australia cap since the 2019 Rugby World Cup.

And the recalled Kerevi came close to an instant impact at Optus Stadium after a pick and go up the middle of the park ended with Marika Koroibete finishing off a 50-metre drive only a few minutes in.

Referee Damon Murphy correctly called play back for an offside pick-up at the ruck, but it was immediately clear Kerevi’s impact in midfield would be a welcome one after such a long absence.

The hosts needed it, too, as New Zealand almost immediately propelled up the other end of the field and responded through one of their own re-summoned stars, Beauden Barrett.

Disciplinary errors in defence gave the fly-half—standing in for Richie Mo’unga, absent due to the birth of his second child—two chances to kick over in quick succession.

The creative cogs started to loosen for the guests as Barrett chipped through with just over a quarter-of-an-hour gone, freeing winger Will Jordan in space up the central channel.

Scrum-half Brad Weber played the middle man in support to send the other Barrett, Jordie, clear for the game’s opening try, with his sibling adding the extras to go 13 points ahead without reply.

Jordie Barrett flew over for the game’s opening score
(

That would prove the highlight of the youngest Barrett brother’s day, however, after a jumping Jordie was swiftly shown red for a high boot in the face of an encroaching Koroibete.

The All Blacks full-back leapt to collect a high ball and put up a foot on his way back to earth, which the officials decided was enough to show the scorer his marching orders.

Barrett’s other sibling, Scott, was sent off the last time New Zealand played in Perth in 2019, and the Wallabies would hope it led to the same result after they emerged 47-26 victors on that occasion.

Many might have felt the decision was a harsh one given Koroibete was on course to make contact with Barrett while he was in the air.

Those same critics will have been further incensed had Koroibete’s next contribution stood, scoring off a short-range line-out only to be pulled back for failing to release.

This time, the visitors showed their hosts how to capitalise, their man disadvantage disappearing as Havili joined a rolling maul to meander over on the stroke of half-time.

Noah Lolesio’s missed kicks came to pay for Rennie’s side when they lost 33-25 to New Zealand in their first Test this summer, not to mention throwing interception tries in both Eden Park matches.

The young fly-half retained the No. 10 jersey nonetheless, but improvements were needed after missing one first-half penalty opportunity to get the hosts up and running.

Ardie Savea led the haka in his first match as All Blacks captain, but his afternoon was cut short after a head injury in the first period meant he wouldn’t return having failed a head injury assessment.

Under the trialled 20-minute red card rule, New Zealand were allowed to replace the sent-off Barrett with a substitute after the allotted time, and Damian McKenzie came on to replace him at full-back.

Australia finally ended their search for points when another of their recalled personnel, Folau Fainga’a, barged his way over the line in the 50th minute.

Full-back Tom Banks had threatened himself with a run up the right wing, but hooker Fainga’a added the five points himself after Kerevi and Tate McDermott played vital roles advancing them upfield.

The Wallabies suffered an all too familiar case of one step forward, two steps backs, however, as the All Blacks responded with ferocity.

Will Jordan kept up his prolific New Zealand scoring record
(

Akira Ioane broke free to send Jordan over in the right corner, bringing his try tally up to four in his last four appearances for New Zealand.

For the third Test in a row, Australia then gifted their trans-Tasman rivals an intercept try that saw New Zealand scale the field in mere seconds, with Havili happy to snap up his second of the day.

The hosts responded through substitute scrum-half Nic White as he slid over to reduce the deficit back to 14 points, though that glimmer of hope proved short-lived.

One would hardly have guessed New Zealand were a man down as Ioane again broke down the right, this time helping to put Anton Lienert-Brown in for the score.

If anything, it was the All Blacks who looked like they had a surplus in players when substitute George Bridge finished a superb team score to grab their sixth try of the day.

White turned architect for one final score as full-back Banks stretched under the posts in the game’s final moments, but it was subtle consolation in another convincing defeat.

Red card or not, there was no point in Sunday’s encounter at which Australia looked to be in control, with the All Blacks sending a major message of intent.

A bonus-point win was enough to take Foster’s men back to the top of the standings, climbing above South Africa, who recently defeated Argentina in back-to-back meetings.

Both teams will be back in action next Sunday when the Rugby Championship moves to Queensland, with the Springboks taking on hosts Australia while New Zealand face the Pumas.