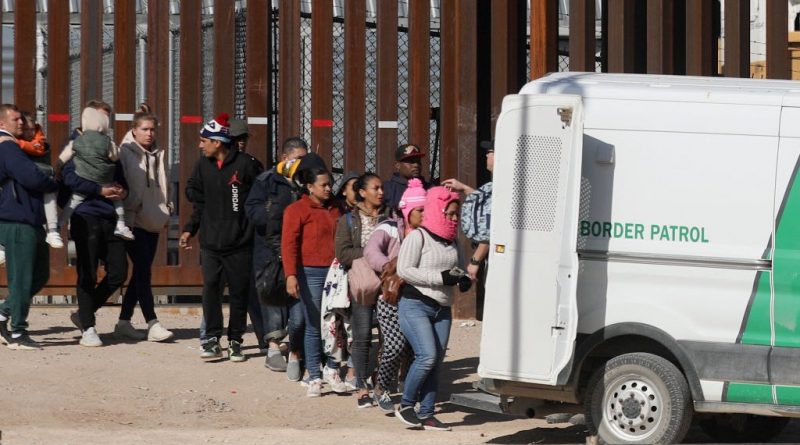 
WASHINGTON—The Biden administration on Thursday said it would immediately begin turning away Cubans, Haitians and Nicaraguans who cross the U.S.-Mexico border illegally, a major expansion of an existing effort to stop Venezuelans attempting to enter the U.S.

Instead, the administration will accept 30,000 people per month from the four nations for two years and offer the ability to legally work, as long as they come legally, have eligible sponsors and pass vetting and background checks. These four affected nations are among those for whom migrant border crossings have risen most sharply, with no easy way to quickly return migrants to their home countries.

It is a massive change to immigration rules, and it will stand even if the U.S. Supreme Court ends a Trump-era public health law that allows American authorities to turn away asylum seekers.

The new policy could result in 360,000 people from these four nations lawfully entering the U.S. in a year. But currently, far more people from those countries are attempting to cross into the U.S. on foot. Migrants from those four countries were stopped 82,286 times in November alone.

The Biden administration has struggled to manage increasing numbers of migrants crossing the U.S.-Mexico border and has been reluctant to take hard-line measures that would resemble those of the Trump administration. That’s resulted in a barrage of criticism from Republicans who say the Democratic president is ineffective on border security.

Biden was to address the border changes in a speech later Thursday. He will travel to El Paso, Texas, this weekend, his first trip to the southern border as president, before a planned trip to Mexico City to meet with North American leaders on Monday.

Mexico has agreed to accept each month from the four countries up to 30,000 migrants who attempt to walk or swim across the U.S.-Mexico border, according to the White House.

Anyone coming to the U.S. is allowed to claim asylum, regardless of how they crossed the border. But the requirements for granting asylum are narrow, and only about 30% of applications are granted. That has created a system in which migrants come between ports of entry and are allowed into the U.S. to wait out their cases. But there is a 2 million-case immigration court backlog, so cases often are not heard for years. Migrants seeking a better life in the U.S. often pay smugglers the equivalent of thousands of dollars to deliver them across the dangerous Darien Gap.

The only lasting way to change the system is through Congress, but a bipartisan effort in Congress on new immigration laws failed shortly before Republicans took the House majority.

Under then-President Donald Trump, the U.S. required asylum seekers to wait across the border in Mexico. But massive delays in the immigration system created long delays, leading to fetid, dangerous camps over the border where migrants were forced to wait. That system was ended under the Biden era, and the migrants who are returned now will not be eligible for asylum.

Biden has agreed to triple the number of refugees accepted to the U.S. from the Western Hemisphere, to 20,000 from Latin America and Caribbean, over the next two years. Both refugees and asylum seekers have to meet the same criteria to be allowed into the country, but they arrive through different means.

At the U.S.-Mexico border, migrants have been denied a chance to seek asylum under U.S. and international law 2.5 million times since March 2020 under the Title 42 restrictions, introduced as an emergency health measure by Trump to prevent the spread of COVID-19, but there always has been criticism that the restrictions were used as a pretext by the Republican to seal off the border.

Even with the restrictions, there are still large increases in the number of migrants arriving to the U.S.-Mexico border. Homeland Security officials stopped migrants 2.38 million times during fiscal year that ended Sept. 30, the first time the number exceeded 2 million.

Biden moved to end the Title 42 restrictions, and Republicans sued to keep them. The U.S. Supreme Court has kept the rules in place for now. White House officials say they still believe the restrictions should end, but they believe they can continue to turn away migrants under immigration law.

Cubans, who are leaving the island nation in their largest numbers in six decades, were stopped 34,675 times at the U.S. border with Mexico in November, up 21% from 28,848 times in October. Nicaraguans, a large reason why El Paso has become the busiest corridor for illegal crossings, were stopped 34,209 times, up 65% from 20,920 in October.

But Venezuelans were seen far less after Mexico agreed on Oct. 12 to begin accepting those expelled from the United States. They were stopped 7,931 times, down 64% from 22,045 in October.

Meanwhile, Border officials are also launching an online appointment portal to help reduce wait times at U.S. ports of entry for those coming legally. It will allow people to set up an appointment to come and ask to be allowed into the country.