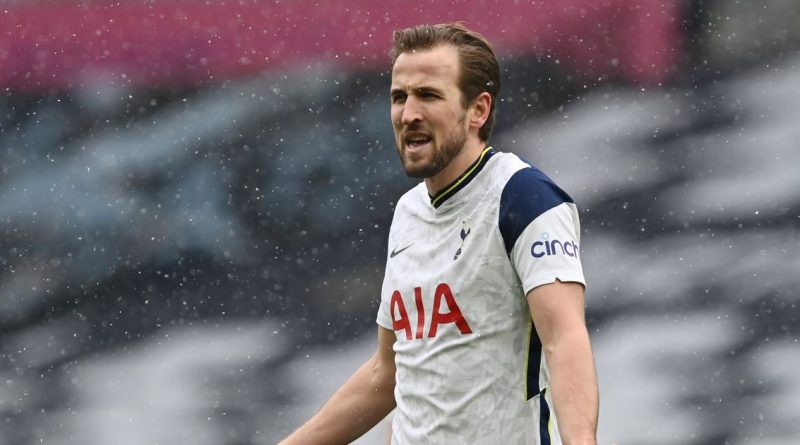 Tottenham captain Harry Kane has expressed desire to leave the club this summer, with Manchester City heavily linked, but Daniel Levy is reluctant to sell his star player

Kane was absent for training for the second day running after being forced to self-isolate following his return from the Caribbean.

However, Kane has told his club he will be back by the weekend at the earliest.

The Tottenham striker had been due back for pre-season training on Monday, after being granted an extended break following his involvement with England at Euro 2020.

The 28-year-old has been consistently been linked with a move away from north London, with Manchester City heavily linked – but Spurs chief Levy is standing firm over his £160million valuation of the striker.

And Neville has issued a warning to Kane should he decide to take on Levy in an attempt to force through a move.

Speaking to Sky Sports, he said: “If Harry Kane was meant to report to pre-season training with Tottenham on Monday, then he should’ve come back. You can never advocate any player not turning up for training – it’s as simple as that.

“You’ve got to turn up and you’ve got to do your job. However, I’ve worked with Harry and I can’t think of a more professional footballer that I’ve ever seen.

“He does everything right, so he must be seriously annoyed. Something has happened badly that has made him do that.

“It still doesn’t excuse it for me. He should still have come into training, and you respect your team-mates. You still have to go and stand with them and sit in the dressing-room, but it’s clear now that there’s a collision course.

“He’s taken Daniel Levy on. Not many do it, not many come out of it the other side, but it’ll be interesting to see which club’s involved. It looks like City [Manchester].

Will Harry Kane leave Tottenham this summer? Let us know in the comments section.

“City make the bid, the number is not enough. Harry thinks it is enough, Daniel doesn’t think it is enough.

“Whether they can come to a compromise together and hopefully they can. If they can’t, then it’s going to be a little bit messy for a few weeks because Harry wants to leave. There’s no doubt about that. It was there for everyone to see a few months ago.

“I can see why. He wants to go and win those trophies and challenge for league titles. Tottenham, are they going to do that? Probably not in this next two or three years. They haven’t done that for the last 20-or 30-years bar one or two.”

Tottenham have declined to comment publicly on the saga that has affected their pre-season preparations.


Spurs reportedly turned down a £100million proposal from City for their star striker earlier in the summer.

The Citizens are still in the hunt for a striker following Sergio Aguero’s exit and Kane could be the perfect fit.

The England striker still has three years left on his current deal and Spurs will do everything they can to keep hold of their star.

City are also trying to get a deal done to sign Aston Villa midfielder Jack Grealish for a British record £100million fee.

Kane joined Spurs as a youth team player and has scored 221 times in 336 appearances during his professional career at the club.

The 28-year-old expressed his desire to win silverware during an interview with Neville in May.

“I don’t know, I mean he (Levy) might want to sell me,” Kane told Neville.

“He might be thinking: ‘If I could get £100m for you, then why not?’ Do you know what I mean? I’m not going to be worth that for the next two or three years.”

Meanwhile, Kane’s team-mates continue their preparation ahead of their opening game against Manchester City next Sunday, with a friendly against Chelsea this Wednesday.

Whether Kane stays or goes in the current window, it’s a transfer saga that will almost certainly go down to the wire.