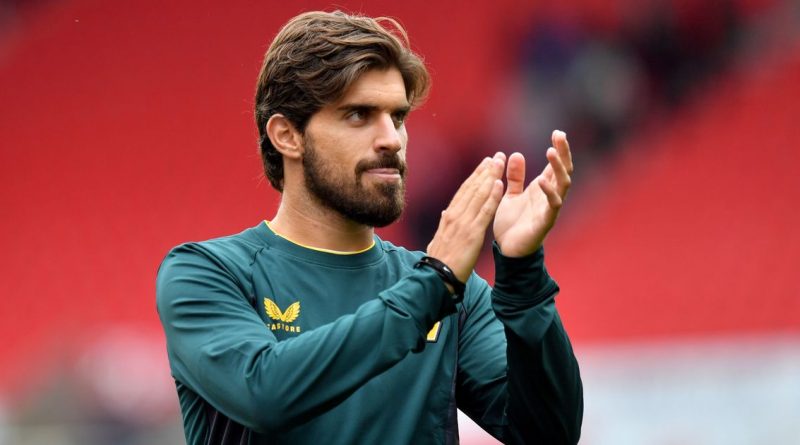 
Ruben Neves has been linked with a move to Manchester United this summer with Wolves in a period of transition, and now the Portuguese has hinted at where his future may lie

Wolves midfielder Ruben Neves has hinted that he has made a decision on his future amid talk of a transfer away from Molineux.

Portugal international Neves has been linked most commonly with a move to Manchester United this summer, while Arsenal have also been credited with interest.

The 24-year-old has been one of Wolves ‘ most consistent performers over the last three seasons in the Premier League, helping to turn them into top half regulars.

Following Nuno Espirito Santo’s departure to Tottenham though, Neves has also been talked up for a move to a seemingly bigger club.

But the former Porto man appears to have cooled any talk of an exit by revealing his excitement at working alongside new Wolves boss Bruno Lage.

Wolves star Ruben Neves has hinted where his future may lie

“He’s a very good coach,” Neves told Wolves TV. “I am really happy to work with him.

“I spoke with a few friends when he signed for Wolves – that were players in Benfica and are good friends of mine – and they said a lot of good things about him.

“I can see it now. He’s a very good coach with lots of good ideas. I think that when things are completely together, we’ll be a really hard team to beat.”

Should Ruben Neves leave Wolves for Man Utd this summer? Have your say in the comments below

Wolves picked up a 2-1 win over Coventry City in a pre-season friendly on Sunday, with Neves handed the captain’s armband.

And he admitted that while it was a good run out for the squad, there was still plenty of work to be done before the start of the season.

“It was a good game, a hard game, with the game yesterday as well,” he added.

“It was a good test for us, I think we did it well, but we have two weeks to improve a lot of things before we go to the Premier League.

“What we wished most was for the fans to come back, it makes a lot of difference for us so we are glad to see them back in the stadium.”

Wolves kick off their Premier League campaign against Leicester in just under two weeks time, and Neves admitted that there could have been easier teams to ease themselves back in against.

“It’s the Premier League. Everyone knows that every team is a hard team, every game is a hard game,” Neves continued.

“Leicester is in brilliant form in the last few years, so it will be a really good test for us.

“But the main thing is that we work hard in the next two weeks, get the work completely done, completely concentrate on what we have to do and get fit, so we can try to get the first three points of the season.”