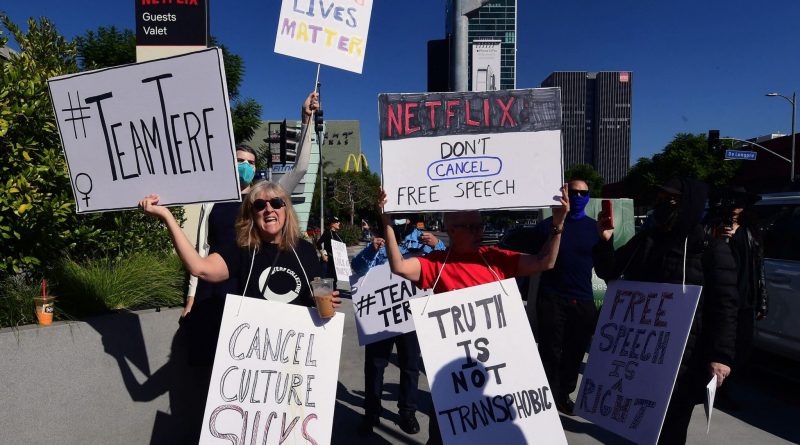 Netflix employees and supporters who walked out over the streamer’s handling of the Dave Chappelle controversy were confronted with anti-trans and free speech counter-protestors in Los Angeles.

Wednesday’s (20 October) protest was intended to demonstrate solidarity with trans and non-binary people in the wake of an increasingly ugly row over Chappelle’s hour-long Netflix special, The Closer, which has been widely criticised for transphobic and homophobic jokes.

Ashlee Marie Preston, who organised the protest outside Netflix headquarters in support of trans employees set to walk out of the offices, told Variety that Chappelle’s show was part of a “hate economy”.

“We’re up against a the emergence of hate economy,” said Preston, who was the first openly trans person to run for state office, in California. “And there is this manipulation of algorithmic science that distorts the way that we perceive ourselves and others.

“And I think that companies like Netflix, Facebook, and Instagram, they play into it, and they monetise on it. And so I think that this is important to show up today.”

They were met by counter-protestors who were there to support Chappelle, with signs reading “Jokes Are Funny”, “Cancel Culture sucks” and “Netflix Don’t Cancel Free Speech”.

As protestors jostled against one another, one free speech protestor’s sign was taken out of his hands and broken in two, leaving him carrying just a stick. Members of the crowd called this a weapon and asked for his removal.

Anti-trans and free-speech protestors outside Netflix

Among the free speech demonstrators were a subset of anti-trans protestors, a group that according to Variety was “primarily composed of white women”, shouting anti-trans catchphrases including “self-love, not surgery”, a dismissive reference to gender-affirming healthcare, and carrying signs including “truth is not transphobic”.

“We are protesting this walkout,” said Gigi LaRoux, who identified herself as a “supporter of comedy”.

“This boils down to equality, and if people want equality they to be put on the same level as anybody else. Comedians are equal opportunity destroyers. You can’t pick and choose who you’re going to make fun of.”

Chappelle’s latest special, which premiered on 5 October on Netflix, sees the comedian make explicit jokes about trans women’s genitals and defend DaBaby and JK Rowling, before declaring himself “Team TERF“.

In response to backlash against the special, Netflix co-CEO Ted Sarandos then said it would not be dropping The Closer, adding that Chappelle’s previous special, 2019’s Sticks & Stones, is the streamer’s “most watched, stickiest, and most award winning stand-up special to date”.

Sarandos has now said he “screwed up” internal communications around the special, which claimed that on-screen content doesn’t translate to real-world harm (a claim Sarandos later retracted). But, he still stands by Netflix’s decision to stream it and has dismissed calls for Netflix to add a warning to the beginning of the show about the anti-trans content.

Last week, Netflix fired Black non-binary employee B. Pagels-Minor, claiming they shared information on the economics behind and viewership of The Closer with Bloomberg.

“I want my child to grow up in a world where they see that their parent, a Black trans person because I exist contrary to what the special says, contrary to what many people say, that I am valued and that I am an important person,” said Pagels-Minor.

I stand with the trans, nonbinary, and BIPOC employees at Netflix fighting for more and better trans stories and a more inclusive workplace #NetflixWalkout https://t.co/LU8FPSBdwE

The walkout was supported by a number of celebrities and people who have worked with Netflix, including queer comedians Hannah Gadsby and Mae Martin, trans actor Elliot Page, and queer actor Jameela Jamil.

Page tweeted on 20 October: “I stand with the trans, nonbinary, and BIPOC employees at Netflix fighting for more and better trans stories and a more inclusive workplace.”

Martin also said they were “standing with Netflix employees”, adding in an Instagram post that they “don’t think it’s very difficult to be funny without ridiculing marginalised groups and contributing to a culture of transphobia”.