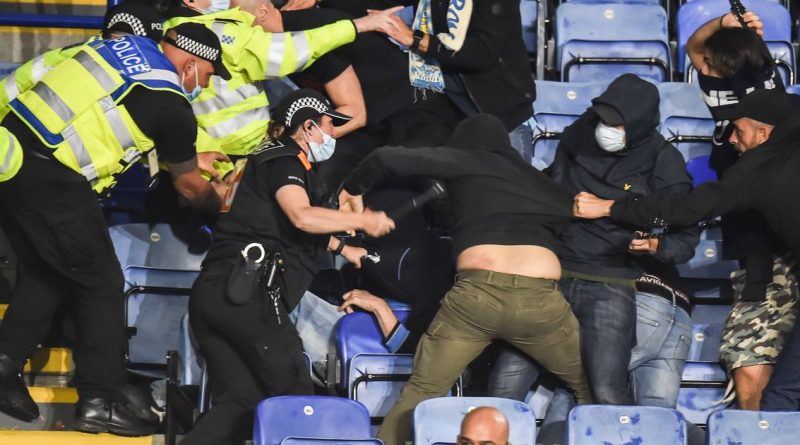 Napoli fans were involved in violent clashes with police after missiles were thrown by both sets of supporters after their 2-2 draw with Leicester City on Thursday.

Tensions flared at the end of the game, which the Foxes were leading by two goals to nil before Napoli came back to take a point.

Wilfred Ndidi was sent off late into stoppage time as both home and away fans began throwing missiles at each other inside the King Power stadium.

Police and stewards were required to step in to hold the Napoli supporters back as the situation threatened to spiral out of control.

Police were pictured standing in a wall between the two sets of supporters as fans attempted to jump the barrier separating them.

It was at the divide where scuffles broke out between fans and the police.

A message from the tannoy at full time ordered home supporters to leave the King Power stadium as police worked to manage the situation.

On the field, Victor Osimhen had denied Leicester the perfect start in the Europa League as Napoli hit back from 2-0 down to snatch a point.

The striker struck twice in the second half as the visitors deservedly grabbed a 2-2 draw in Group C at the King Power Stadium.

But Osimhen grabbed a classy lifeline for the visitors and then headed in a late leveller, with Leicester’s frustrations compounded when Ndidi was sent off in injury time.

Roberto Firmino, Robbie Fowler or Ian Rush: Who is Liverpool’s best ever No.9?