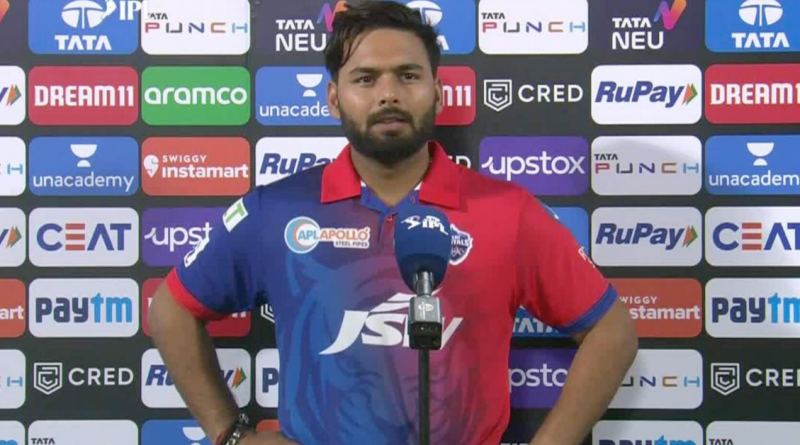 Delhi Capitals’ skipper Rishabh Pant has reacted to his side’s shambolic loss against Royal Challengers Bangalore in the 27th match of IPL 2022. DC and RCB locked horns in the 2nd game of the Saturday doubleheader at the Wankhede Stadium in Mumbai. Rishabh Pant won the toss and elected to field first.

Pant’s decision was backed by his bowlers as Delhi managed to strangle RCB in a hold in the first 8 overs by picking up their top 3. Glenn Maxwell wasn’t to be stopped, however, as he carried his onslaught that brought him his first half-century of IPL 2022. Another carnage from Dinesh Karthik in the slog overs and a steady partnership with Shabaz Ahmed ensured RCB finished on a high score of 189/5 in their 20 overs.

Delhi Capitals never looked settled apart from David Warner and Prithvi Shaw’s opening stand. David Warner came up with yet another half-century but it wasn’t enought for the Delhi-based franchise to cross the finishing line. Rishabh Pant, himself, came up with some attacking gameplay but he fell prey to a brilliant catch from Virat Kohli.

Speaking in the post-match ceremony, Pant said, “I think Warner batted beautifully and gave us every chance to win the match. Can’t blame Marsh, it was his first match and looked a bit rusty, but we could have done better in the middle overs. The wicket got better and better as the innings went along, that over from Mustafizur was a game changer for us.”

“I think we could bowl according to our plans, but we were under the pump, the way DK batted in the later overs was commendable. One boundary length was shorter, so I changed Kuldeep’s end and he bowled really well. We will have to talk about doing better as a team, we’ll have to learn from our mistakes in the coming games,” Rishabh Pant further added.

After the emphatic win over Delhi Capitals by 16 runs, RCB cruised to the 3rd spot in the IPL 2022 points table. Delhi, on the other hand, have found themselves in huge trouble as they entered the bottom 3 of the points table, sitting right above Chennai Super Kings and Mumbai Indians.

RCB will now face Lucknow Supergiants in the 31st match of IPL 2022 at the DY Patil Stadium in Mumbai on Tuesday. Delhi, on the other hand, will be taking on Punjab Kings in the 32nd game of the tournament at the MCA Stadium in Pune on Wednesday.