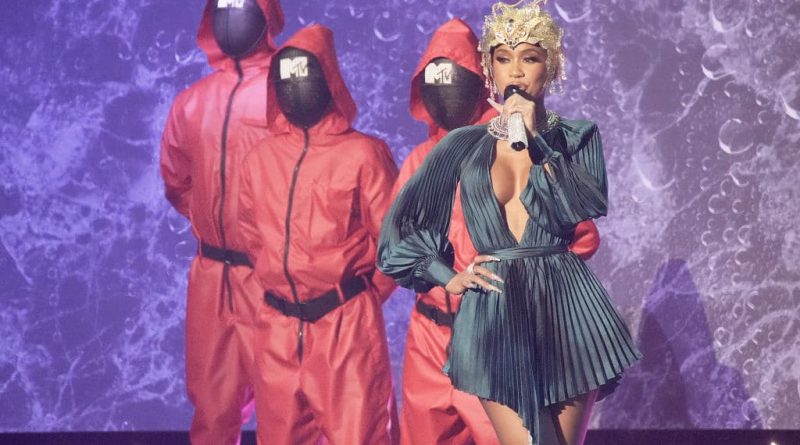 Saweetie on stage at the MTV EMAs 2021 ‘Music for ALL’ at the Papp Laszlo Budapest Sports Arena. (Jeff Kravitz/FilmMagic)

Saweetie delivered a powerful message of support for Hungary’s embattled LGBT+ community while hosting the MTV EMAs in Budapest on Sunday night (14 November).

The much-loved rapper, lying on a chaise longue wearing a bikini, told those watching at home that it is “always important we respect each other”.

“That’s why it’s so important we stand up for the LGBTQ+ community,” Saweetie said.

Organisers of the MTV EMAs had faced some criticism after it was announced that the awards ceremony would be held in Hungary, where a law was recently passed that equates homosexuality with paedophilia.

However, Saweetie and other performers put LGBT+ rights in the spotlight at the awards ceremony, with many using the opportunity to speak out in support of queer people.

Years and Years singer Olly Alexander highlighted LGBT+ adoption when presenting the award for Best Video, telling those watching at home that all of the nominees “support same-sex adoption as family is family”.

Speaking to Press Association on the red carpet, trans singer Kim Petras – who became the first ever trans performer at the EMAs – said that censorship “of any kind of love sucks. It’s not good. No one should feel, you know, not represented in media. No one should feel like it’s not OK to be who they are”.

OneRepublic’s Ryan Tedder told PA that it sent “a huge message” to host the awards ceremony in Budapest when LGBT+ rights were under attack.

“I’m from an extremely conservative, right-wing city and family and religious community so until I was 20 I had the same kind of thoughts of like ‘Oh, that’s bad, this is good’.

“And now I’m sitting here going it’s absurd we even have to make these statements that everyone is equal and showing love and equality.

“These are things that should have been the absolute bedrock of constitutions and humanity for the last 100 years but, you know, it takes a minute for humans to catch up and I think we’ve finally caught up.”

Yungblud kissed a band member onstage at the MTV EMAs

English singer Yungblud delivered a powerful plea for diversity and individuality after performing at the awards ceremony. The singer said his award for “Best Alternative” as a “tribute to individualism”, adding that he was “terrified” to be himself when he was growing up.

“If you are out there and you feel you cannot be who you are – you can be,” he said.

He also kissed one of his bandmates on-stage in a defiant show of support for the LGBT+ community.

The EMAs also recognised the work of five LGBT+ activists who are fighting to change the world with the new “Generation Change Award”. Drew Barrymore delivered a powerful video message to the winners in which she heaped praise on them for the “incredible things” they have done for the LGBT+ community.

Radvantyi urged LGBT+ people to vote, adding: “Never accept the notion that you should tolerate violence and discrimination. Every single human being is born equal, period… Let’s not let them force us back to the closet.”