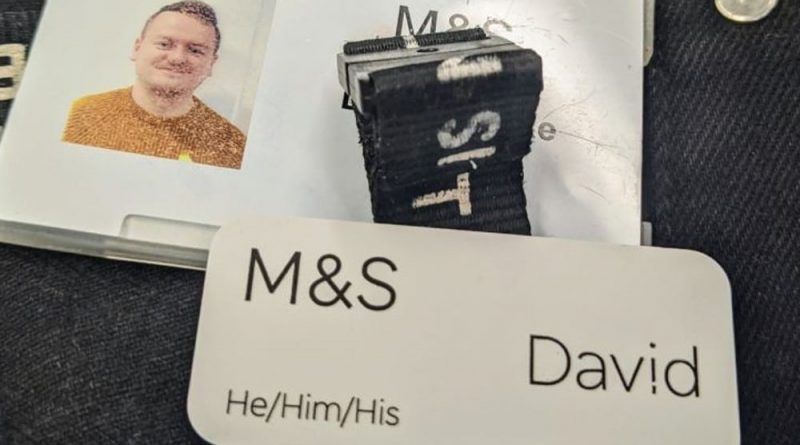 
M&S has introduced the option of pronouns on its staff name badges so that customers know how to address employees correctly.

The retailer said its new gender inclusivity drive came after staff asked for the choice to display their pronouns at work. Employees at M&S stores and offices across the UK now have the option to add “He/Him/His”, “She/Her/Hers” or “They/Them/Their” beneath their name.

“Recently, we introduced pronoun name badges for our colleagues, encouraging as many of them as possible to wear whichever combination of pronouns is right for them,” M&S said on LinkedIn.

“An amazing initiative provided by one of our colleagues Morgen Kane to our Suggest to Steve programme, as we continue to build an inclusive future, together.”

“Giving people the option to display their pronouns at work is really important as it encourages them to show allyship towards trans and non-binary colleagues,” he told PinkNews.

“Many of us already include our pronouns in our email signatures, but when you’re talking to people in person it’s useful to know how they want to be referred to in order to help everyone feel comfortable and avoid any misgendering.”

Trans and gender non-conforming people are significantly more likely to attempt suicide than the cisgender population; however, studies have shown that consistently using their correct name and pronouns can reduce their rates of anxiety, depression and suicidal thoughts to almost the same levels as their cis counterparts.

Cis people displaying their pronouns normalises the act without placing the onus on trans people, and most importantly signals that their identities will be respected.

“Right now trans people in the UK are facing more abuse and discrimination than ever before, and so it’s up to all of us to create an inclusive culture and make sure everyone gets the respect they deserve,” Parke said.

“It’s great that M&S is proactively taking these sorts of steps to support and celebrate LGBT+ colleagues.”