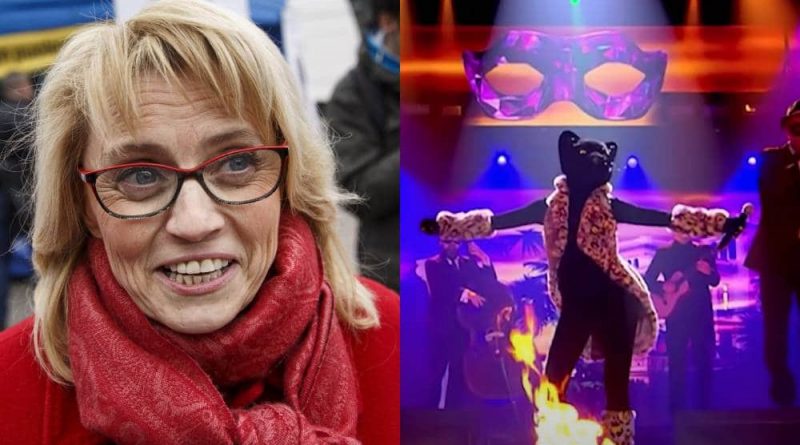 An MP awaiting trial over anti-LGBT+ comments was a surprise addition to Finnish version of The Masked Singer.

Päivi Räsänen, a seventh-term member of the Finnish parliament and ex-chair of the Christian Democrats, was charged in April with three charges of incitement against a minority group for harmful statements she made about the LGBT+ community.

Räsänen participated in Masked Singer Suomi in September as the Jaguar, with her casting drawing widespread criticism, including from one of the show’s judges.

Judge Christoffer Strandberg wrote on Instagram: “The situation was personally very strange, as it undeniably felt a little strange to applaud and cheer for someone who has been at war with the rights of people like me for decades.”

He said Räsänen has been “most public about her statements regarding sexual minorities” and “doesn’t regret a single deeply offensive, delusional word”.

While Strandberg didn’t take a stance on the “suspicion of the crime itself”, he said it’s “high time that hate speech is dealt with properly”.

“I do not believe in a cancel culture, I believe in freedom of speech and I defend the right to disagree,” Strandberg said. “But because even in Finland today you have to face bullying, discrimination, intimidation, starvation and violence if you represent a sexual minority, I want to say that words, deeds and choices are very important.”

He added: “That is why I want to say that I am not standing behind this episode with all my heart.”

Journalist and influencer Mona Bling also called out the Masked Singer Suomi for including Räsänen on the programme.

“Why does the Finnish media constantly give space to people who trample on human rights?” she wrote on Twitter. “Didn’t anyone think that Päivi Räsänen, who has been charged with incitement against a group of people, does not fit into the program of the whole family?”

Producers of Masked Singer Suomi told ltalehti that performers attached to the programme and production were brought on “at the turn of the year”. They added that the show’s format “includes all kinds of well-known celebrities from different walks of life”, and the programme did not “want to discriminate against anyone”.

Räsänen shared an article detailing the backlash against her appearance on Masked Singer Suomi on Twitter. She said it was good that Strandberg brought “cancel culture and freedom of speech to the debate”.

Finland’s prosecutor general filed three charges of incitement against a minority group against Päivi Räsänen over statements she made regarding the gay community. Räsänen is a trained medical doctor and MP and previously held the office of minister of the interior of Finland between 2011 to 2015.

Finland’s attorney general believed Räsänen’s comments “are likely to cause intolerance, contempt and hatred towards homosexuals”, according to a press release from the Prosecutor General’s office.

The office said her statements “violate the equality and dignity of homosexuals so they transcend the boundaries of freedom of speech and religion”.

One charge concerned Räsänen’s writings where she claimed that “gay relationship challenge the Christian conception of man” which were later published on the websites of the Luther Foundation Finland and the Evangelical Lutheran Mission Diocese of Finland. The Prosecutor General’s office said that Räsänen presented “derogatory opinions and information about homosexuals” and claimed that “homosexuality is a scientifically proven disorder of psychosexual development”.

According to the Prosecutor General, Räsänen also made “derogatory statements about homosexuals” on a Yle Puhe radio programme episode titled “What did Jesus think about gays?”

“In it, Räsänen has said that if homosexuality is genetic, then it is a genetic degeneration and a genetic gene that causes disease,” a press release detailed. “In Räsänen’s view, homosexuals are also not created by God like heterosexuals.”

Räsänen announced on her website that the “main hearing” of the charges brought against her by the prosecutor general will take place on 24 January.

She said the “process” of bringing charges against her started “more than two years ago” when she “posted a tweet addressing a question to the leadership of my church that had signed up to support Pride”. The “main content” of her post was a “screenshot of verses 24-27 from the book of Romans chapter 1 from the New Testament”.

The two other charges concerned a “pamphlet I had written in 2004” which said “Male and female, He created them” and statements she made on a talk show in December 2019.

“In all the charges, I deny any wrongdoing,” she said. “My writings and statements under investigation are linked to the Bible’s teachings on marriage, living as a man and a woman, as well as the Apostle Paul’s teaching on homosexual acts as sin and shame.”

According to the Catholic News Agency, Räsänen questioned her church’s sponsorship of the LGBT+ Pride event on Twitter on 17 June, 2019, linking to a post on Instagram.  Her Instagram caption asked how her church’s “doctrinal foundation” fit in “with the idea that shame and sin are raised as a matter of pride”.

The text and image were also put on her Facebook.

The news outlet added that Räsänen is being supported by ADF International and could face a two-year prison sentence or a fine for her tweet. She could also face additional jail time if convicted on the two other charges.