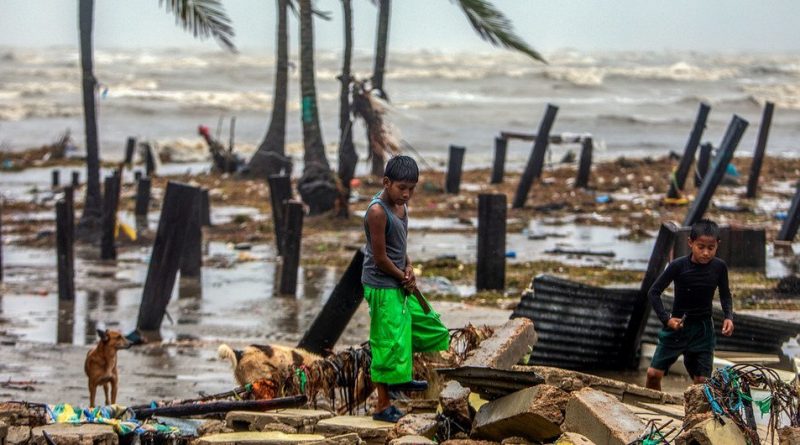 
The Adaptation Gap Report 2022 has been released ahead of the COP27 UN climate conference, which opens this weekend in Sharm El-Sheikh, Egypt.

It calls for increased funding and implementation of actions aimed at helping vulnerable nations and communities adapt to the climate emergency in the face of mounting risks.

“Climate change is landing blow after blow upon humanity, as we saw throughout 2022: most viscerally in the floods that put much of Pakistan under water,” said Inger Andersen, the UNEP Executive Director.

“The world must urgently reduce greenhouse gas emissions to limit the impacts of climate change. But we must also urgently increase efforts to adapt to the impacts that are already here and those to come.”

The report emphasizes that adaptation, as well as mitigation, must be front and centre in the global response to the climate crisis.

Under the landmark 2015 Paris Agreement on climate change, countries pledged to limit global warming to 1.5°C above pre-industrial temperatures but are far off track.

The Pakistan floods and other current impacts, such as the historic drought in the Horn of Africa, are occurring when global temperature rise is at only 1.1°Celsius above pre-industrial levels.

In a companion report issued earlier this week, UNEP said Nationally Determined Contributions (NDCs) – governments’ own national plans to tackle climate change – point towards global warming of up to 2.6°C by the end of the century.

Furthermore, research from the Intergovernmental Panel on Climate Change (IPCC) shows that climate risks will intensify with each tenth of a degree.

For UN Secretary-General António Guterres, the report makes clear that the world is failing to protect people from what he called the “here-and-now impacts” of climate change.

“Adaptation needs in the developing world are set to skyrocket to as much as $340 billion a year by 2030. Yet adaptation support today stands at less than one-tenth of that amount,” he said in a message marking the launch.

“The most vulnerable people and communities are paying the price. This is unacceptable.”

The report found that progress on adaptation has been “slow and spotty”.

Eighty per cent of countries have at least one national adaptation planning instrument, while one-third of the 197 governments that are party to the UN Framework Convention on Climate Change (UNFCCC) have incorporated quantified and time-bound targets on adaptation.

Additionally, nearly 90 per cent of planning instruments studied display consideration for gender and disadvantaged groups, such as Indigenous peoples.

However, financing for these plans remains the sticking point.  Estimated adaptation costs are five to 10 times greater than international adaptation finance flows to developing countries, which reached 29 billion in 2020, a four per cent increase over the previous year.

In 2020, combined adaptation and mitigation finance flows fell at least $17 billion short of the $100 billion pledged annually to developing countries.

UNEP said a significant scale-up is needed to meet the goal of doubling 2019 finance flows by 2025, as stressed in the outcome of the COP26 global climate conference, held last year in Glasgow, Scotland.

“Nations need to back the strong words in the Glasgow Climate Pact with strong action to increase adaptation investments and outcomes, starting at COP27,” said Ms. Andersen.

Meanwhile, although implementation of adaptation actions – mainly in agriculture, water, ecosystems and cross-cutting sectors – is increasing, it is not keeping up with climate impacts and could be outpaced by accelerating climate risks.

‘No time to lose’

Underlining the need for strong political will to increase investments and outcomes, the Secretary-General said that the adaptation gap must be addressed in four critical ways.

“The world must step up and protect people and communities from the immediate and ever-growing risks of the climate emergency. We have no time to lose,” he warned.

The UN chief called for dramatically increasing the quantity and quality of financing so that developed countries will achieve the target of doubling support for adaption to $40 billion annually by 2025.

‘At COP27, they must present a credible roadmap with clear milestones on how this will be delivered – preferably as grants, not loans,” said Mr. Guterres.

“They must also use their influence as government shareholders of multilateral development banks to prioritize adaptation, resilience and vulnerability.  At least half of all climate finance should flow towards adaptation.”

The world urgently needs a new business model for turning adaptation priorities into investable projects, he continued, pointing to the mismatch between what governments propose and what financiers consider as investible.

“The investment pipeline is blocked; we must unblock it now. We need a global surge in adaptation investment to save millions of lives from climate carnage.  It is high time for unprecedented coordination among recipient governments, development partners and other financiers,” he said.

Relatedly, the Secretary-General has asked the UN Development Programme (UNDP), the NDC Partnership, and several climate funds to work with public and private financers to pilot a new Adaptation Pipeline Accelerator for targeted countries.

Mr. Guterres highlighted the need for “far better climate risk data and information”, his third point, which are crucial to protect lives and livelihoods in vulnerable countries and communities.

For his final point, the UN chief stressed the importance of delivering on his appeal for universal early warning systems within five years.  He called for providing the financial and technical support required to implement an action plan that the World Meteorological Organization (WMO) will present at COP27.

While these priority areas demand unprecedented international cooperation and support, he also acknowledged that in many places, it is too late for adaptation.

Therefore, COP27 must provide a clear and time-bound roadmap on closing the finance gap for addressing loss and damage, an issue that he said will be “a central litmus test for success” in Egypt.