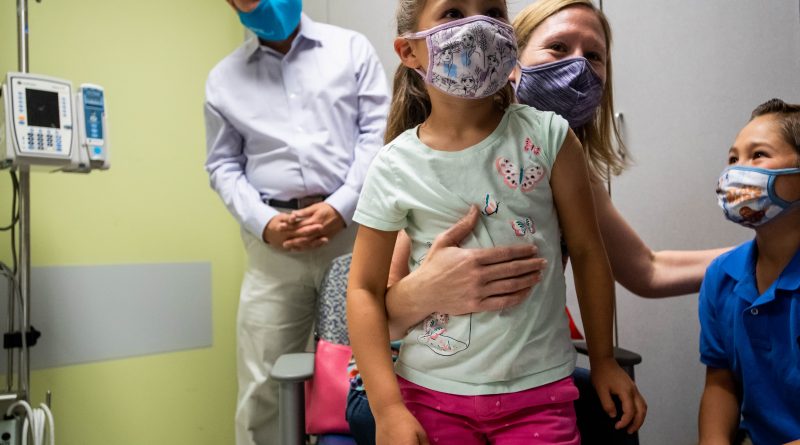 With her husband Stephen by her side Erin Shih hugs her children Avery 6, and Aidan, 11, after they got their second Moderna COVID-19 vaccines at Kaiser Permanente Los Angeles Medical Center on Friday, June 25, 2021.

Moderna plans to expand the size of its clinical trial testing its Covid-19 vaccine in kids ages 5 to 11, the company confirmed to CNBC on Monday.

The U.S. drugmaker is expanding the trial, which began in late March, to increase the likelihood of detecting potential rare side effects, the company said, declining to say how many children it ultimately hopes to enroll. The Food and Drug Administration last month added a warning label to the Pfizer and Moderna Covid-19 vaccines to list a rare risk of heart inflammation, which was reported in young people, as a potentially rare side effect.

“It is our intent to expand the trial and we are actively discussing a proposal with the FDA,” the company told CNBC in a written statement. “At this point, we expect to have a package that supports authorization in winter 2021/early 2022, should the FDA choose to use the authorization avenue.”

The New York Times reported earlier Monday that the FDA asked both Moderna and Pfizer to include 3,000 children in the 5 -to 11-year-old trials, citing unnamed sources. One source described that as double the original number of study participants envisioned, according to the Times.

In a statement to CNBC, Pfizer said it has not provided any updates to the previously stated timelines or details for its trial.

The update comes as parents in the U.S. patiently wait for their children to be eligible to get vaccinated. In May, the FDA permitted the use of the Pfizer-BioNTech Covid vaccine for kids ages 12 to 15. Moderna’s vaccine is expected to be authorized for kids as young as 12 any day now.

Vaccinating children is seen as crucial to ending the pandemic. The nation is unlikely to achieve herd immunity — when enough people in a given community have antibodies against a specific disease — until children can get vaccinated, scientists say.

Federal health officials will need to balance the risk of potentially rare side effects from the shots against the risks of getting Covid.

There have been just 12.6 heart inflammation cases per million doses for both vaccines combined, officials said at the time. They added the benefits still outweighed the risks.